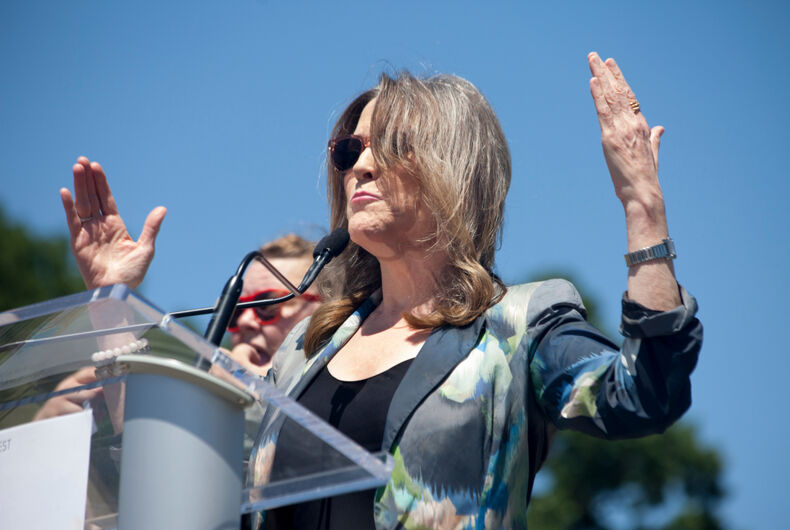 Marianne Williamson quickly became the most Googled candidate after last night’s Democratic primary debate after spouting off some woo-woo nonsense along with several stinging spot-on critiques of American politics. As one of the LGBTQ community’s first celebrity allies, it’s worth taking a look at her candidacy.

The self-help guru has millions of fans across the country who tacitly endorse her variety of feel-good mumbo jumbo and are willing to overlook her verbal crystal shining in favor of her common sense statements about the state of the country and our political leaders.

“People say our system is broken — it’s not just broken, it’s corrupt to the core. It’s not just that our economy isn’t working for everyone, it’s that our economy has become completely taken over by corporate forces,” she told The Hill. And her attacks on her fellow candidates for accepting corporate cash resonated with debate watchers.

Trump’s supporters craved his blunt bon mots, Bush voters wanted to have a beer with him, and everyone wanted to be Obama’s friend. Modern voters are willing to look outside of the box, as evidenced by Trump, if the candidate can make voters feel good about themselves.

Enter Williamson, the best selling self-help guru to the stars. While Trump has his celebrity pals, so does Williamson and it’s her fans that have kept her in the race so far. One of her biggest fans is Oprah Winfrey, another celebrity people wanted to be President. While she only polls at half of a percent, she’s had enough unique donors to remain in the race.

She also has the distinction of being the only former cabaret singer in the race–so far. Williamson dropped out of Pomona College after two years to move to New York to pursue that dream, but eventually returned to Calfornia, where she became known for her lectures on spirituality.

The lectures coincided with the rise of the AIDS epidemic, and Williamson message of love without condemnation struck a chord in the gay community. Williamson threw herself into the fight against the epidemic, founding the Los Angeles Center for Living, a support services organization for people with AIDS, and Project Angel Food, a food service for housebound people with AIDS.

By 1992, Williamson had parlayed her popularity into a series of best-selling spiritual books, becoming an Oprah-approved celebrity. In 2014, Williamson made an unsuccessful run for Congress from California. Most recently, she’s been on a Love America Tour, which promises “a revolution in consciousness [that] paves the way to both personal and national renewal.”

It’s safe to say that no one has longer or more in-depth ties to the gay community than Williamson. At a time when gay men with AIDS were treated as pariahs, Williamson was one of the few who offered comfort and hope. “Many gay men came to my lectures at that time, eager to hear of a God who loved them no matter what,” Williamson recalled.

That doesn’t mean Williamson is without her critics. Her handling of Project Angel Food was especially contentious and led to a split between the East Coast and West Coast branches of the organization and Williamson’s departure. At the time of the blow up, theLos Angeles Times characterized her as having a “temperamental, imperious nature–‘the bitch for God,’ as Williamson has wryly described her reputation.”

She’s also come under fire for her stance on childhood vaccinations. While she first described the process as “Orwellian” because the government forces parents to vaccinate their children, she later walked back the comments.

“I recognize there are epidemics around the world that are stopped by vaccines,” Williamson tweeted the next day. “I also understand some of the skepticism that abounds today about drugs which are rushed to market by Big Pharma. I am sorry that I made comments which sounded as though I question the validity of life-saving vaccines. That is not my feeling and I realize that I misspoke.”

Jesus Christ @marwilliamson just massacred that stage. I don't know what I was expecting tonight but sister, I was not expecting that.#DemocraticDebate #DemDebate

Marianne Williamson has implied that people who take antidepressants are weak, that you can cure cancer and HIV with love, and that fat people need to pray more. She’s a heinous wind chime of a human and I’m losing a lot of respect for people praising her right now. #DemDebate