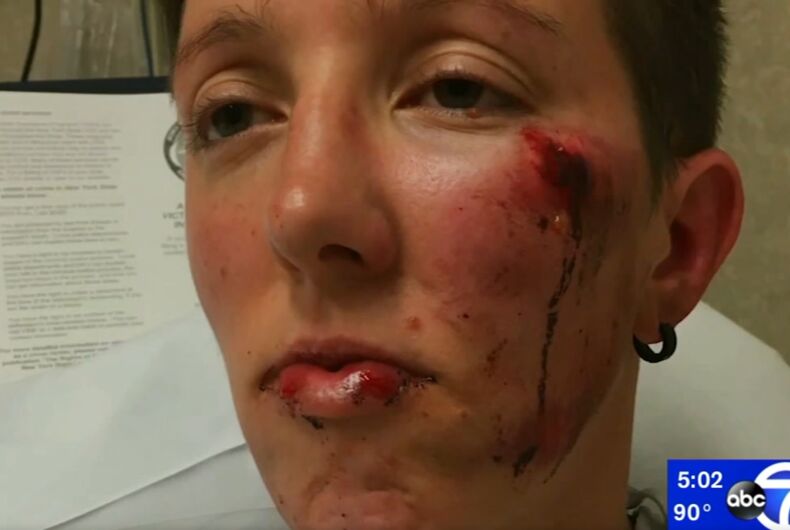 A lesbian couple in New York was brutally attacked by a group of men, leaving the victims scared.

Kimberly Page is speaking out publicly about a violent attack as police search for suspects. Page said that she and her girlfriend were out late with friends in a town on Long Island on July 7.

At around 3:30 a.m., Page and her girlfriend were alone when a group of men approached them and taunted them.

Related: A victim might need surgery after a possible hate crime in New York

They “started saying obscene things to my girlfriend and I,” Page said. “It originated by him asking her if she wanted a real [expletive] and why is she with this [slur].” She said that they tried to ignore the men, but then the men got angry.

The man slapped Page’s girlfriend and then punched Page.

“From that first punch I fell to the ground and I was unconscious for part of it, but what I know now is he was bashing my head on the ground,” she said.

The girlfriend tried to help Page, but she was pushed down by the group of men. The men ran away before police arrived at the scene.

“My knee has a gash in it,” she said, and she also has injuries on her eye, face, and back of head.

Both women were taken to the hospital, and Page had to stay overnight.

“Seeing her and what was done to her tore my wife and I up,” said Timothy Page, Kimberly Page’s father.

“Yes, I want to find person who did it but I want understanding to come out and people to understand we’re all different but we have to live together.”

Her mother, Marie Page, said that she fears for her daughter now.

Suffolk County Police said that the attack is being investigated as a hate crime and has offered a $5000 reward for information leading to an arrest.

They also released an image from a nearby security camera, hoping to identify the suspect in it. Police believe that the man was the only one in the group to participate in the attack.