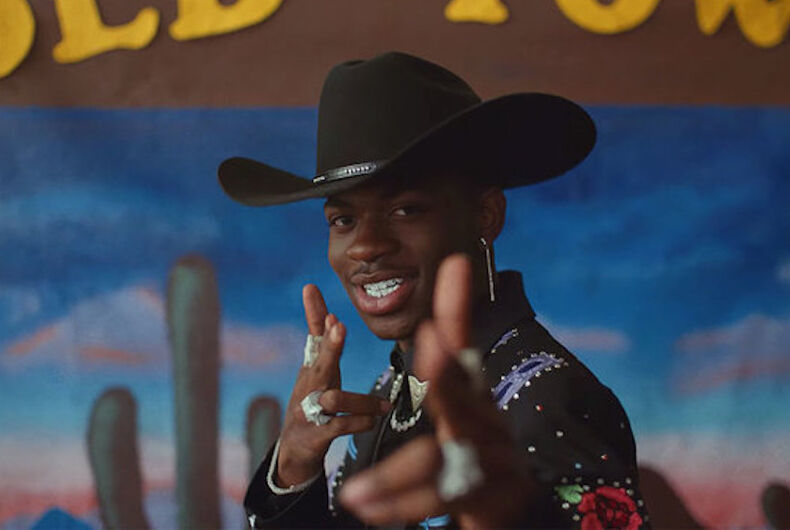 This week, 20-year-old rapper Lil Nas X pulled back the curtain on his life situation, providing some insight into how he went from a poor young person living in the Georgia projects to an out gay, record-breaking hip-hop star whose song has become Billboard’s longest running Number One track of all time.

In a recent tweet, Lil Nas X wrote, “Wow man last year i was sleeping on my sisters floor, had no money, struggling to get plays on my music, suffering from daily headaches, now i’m gay.”

Lil Nas X only recently gained notoriety after releasing “Old Town Road,” his musical collaboration with country music singer Billy Ray Cyrus. “Old Town Road” went on to break music records. Soon after releasing the song, Lil Nas X came out as gay, becoming the only artist to come out while having a number one hit record, his June 2019 album, 7.

But he came from humbler beginnings. Lil Nas X (birth name Montero Lamar Hill) was born in the little town of Lithia Springs — population 15,491 — outside of Atlanta, Georgia. After his parents divorced at age six, he was raised by his mother and grandmother in the Bankhead Courts housing projects.

The projects were surrounded by warehouses and industrial plants. The projects had chronic issues of backing-up sewage and were reportedly so dangerous that mailmen had to walk with police escorts. Most of the residents were under the age of 19 in families headed by women. During this time, he knew many people whose loved ones had been murdered.

Three years later, at age nine, he and his little brother moved in with his father in Austell, Georgia, a town of 7,512 people about 17 miles west of Atlanta.

In an interview with Rolling Stone, Nas said, “I remember not wanting to go. I didn’t want to leave what I was used to. But it was better for me. There’s so much shit going on in Atlanta — if I would have stayed there, I would have fallen in with the wrong crowd.”

He says he barely speaks with his mother and hasn’t spoken with her since “Old Town Road” came out.

Nas was a bright kid, a self-described class clown, but one who took schoolwork seriously. He started playing trumpet in fourth grade, and by junior high he was good enough to make first chair. But he gave it up when he started high school because he “didn’t want to look lame.” “I wish I would have stayed in it,” he says….

As Nas started high school, his social life migrated almost entirely online…. He got deep into Twitter, making friends and posting memes and jokes across several different accounts … to build a following, so he’d have a platform to promote himself someday. At first he tried his hand at comedy, posting goofy videos to Facebook and Vine.

He eventually started studying computer science at the University of West Georgia. The summer after his freshman year, he experimented with making music and decided to drop out after a song of his called “Shame” gained some popularity on SoundCloud.

He crashed at his sister’s house and lived off the money he’d saved working as a cashier at Zaxby’s, a Georgia chicken chain, and as an attendant at Six Flags, where he supervised kids’ rides like Yosemite Sam’s Wacky Wagons. He didn’t have a car or even a driver’s license. “There was no point in a license,” he says, “ ’cause when am I gonna have a car?”

After failing to gain traction with his new musical experiments, he discovered a catchy banjo sample on YouTube, paid its creator $30 and wrote “Old Town Road,” a song about being a loner cowboy. He created it specifically with an eye towards going viral, writing easy-to-remember lyrics and promoting it by retweeting cheesy cowboy and horse images on Twitter.

After it began appearing on music charts, Nas signed a record deal with Columbia in New York City and Cyrus recorded a verse for the “Old Town Road” remix. The rest is history.

Now, a little boy from the projects is now one of the most successful gay hip-hop musicians of all time.