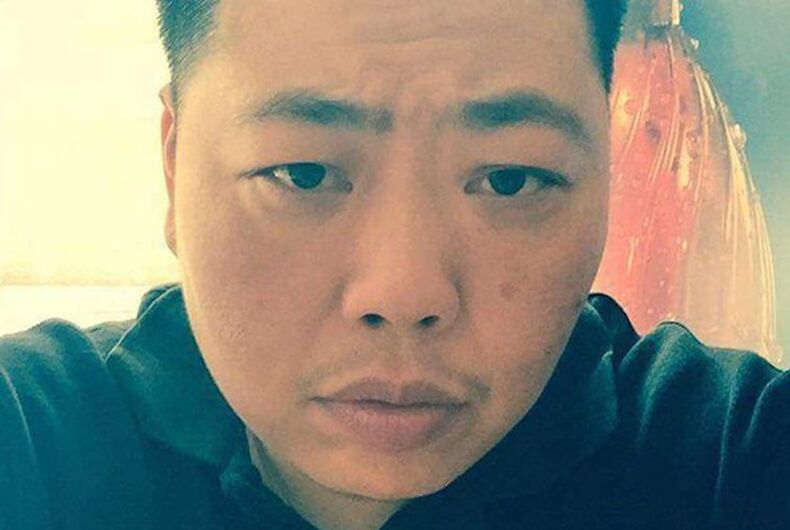 Earlier this month, Yuen “Chin” Tzu, a trans man from Hong Kong, was released from the Irwin County Immigration Detention Center in central Georgia where he had been held for 19 months in solitary confinement. Although he has since been relocated to a detainment facility in Dallas, Texas, the fate of his deportation proceedings remain unclear.

The National Queer Asian Pacific Islander Alliance (NQAPIA) pressed for Tzu’s release (and for an end to trans solitary confinement in general) using a letter writing campaign and a demonstration in front of the Irwin County detainment facility.

In a video (below), NQAPIA wrote that despite his being diabetic, Tzu had been given food that exacerbated his illness and caused him to develop “a stomach condition.” He had also allegedly been given the wrong hormonal medications and dosage.

Sadly Chin’s situation is not unique. It illustrates the situation of many trans men and women in ICE detention. ICE agents across the country declare that they “don’t know what to do with” transgender detainees. Some are held in segregated group cells, others in solitary confinement. There have been many reports of mistreatment, lack of medical services, distribution of incorrect medication and poor and inhumane conditions.

Thus far, Immigrations and Customs Enforcement (ICE) has had a bad record of mishandling its trans detainees. A June 2019 article by the Pacific Standard points out “Johana Medina Leon was the second trans woman to die after falling ill in ICE detention in just over a year. Advocates warn that trans people face injury, [sexual] abuse, and neglect in ICE detention centers.”

Longtime trans and immigrant rights activist Jennicet Gutiérrez said, “As a transgender person, living in this country without documentation for some time, it makes me feel like it could happen to me at any time. That I could be the next victim, that my own life could be at risk just because of who I am.”

Could a PrEP implant change the fight against HIV infection forever?