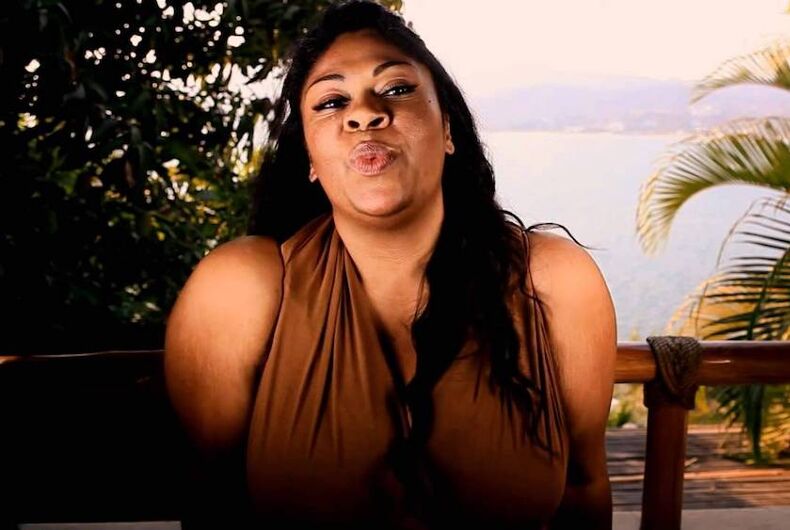 In a recently posted video of a sermon by Kim Burrell, the disgraced gospel singer blamed the devil and “hiding-fake-church people” for the blowback she received following video of her antigay comments that surfaced in 2017. She also came up with a new meaning for the LGBTQ initialism: “Let God Be Truth Quickly.”

You may recall that in 2017, she delivered a sermon at a Houston church in which she referred to gays and lesbians as perverted. Burrell sang “I See Victory” on the soundtrack for the 2016 historical drama Hidden Figures. As soon as her comments surfaced, the film’s actors condemned them, Ellen DeGeneres cancelled her scheduled TV appearance, a Texas university canceled her radio show and the CW dropped her TV talk show from its lineup and the music company pulled her from their annual Trailblazers of Gospel Music event.

But Burrell has remained defiant in the face of blowback, apparently. In the recently posted sermon, she says, “Some people thought I was worried about all this mess when the LGBTQ or whoever they was coming after me. I told them, ‘I dunno about no LGBTQ. For all I know that means ‘Let God Be True Quickly.'”

The congregation applauds at this line. She also says:

“I’m not bitter I’m not angry. I’m just aware. I realize that some folk, oh my god, they’ll be one way one day and the next day they will change on you. Y’all do what you want to, I don’t know about none of it. Y’all kill me, church people, y’all kill me being scared to tell the truth about God’s word. Y’all kill me with that.

Well the day I woke up and realized it wasn’t just the world against me, it was hiding-fake-church people who don’t wanna own up to the truth of the Bible, didn’t wanna associate with me, scared to bring me to their churches, cancelling assignments. There’s not one door that I’ve missed, and as you can see, there’s not a meal that I’ve missed either.”

She said this last line pointing to her curvaceous body. Then she continued:

“And ‘sho ain’t losing no sleep. I said unto the devil, ‘Whatever you tried, it did not work.’ Y’all not talking to me. I’m about to close on a 12.3 million dollar edifice in Houston, Texas – I’ll send you an invitation when I go in. Whew-whew-whew-whew-whew-whew!”

Could a PrEP implant change the fight against HIV infection forever?