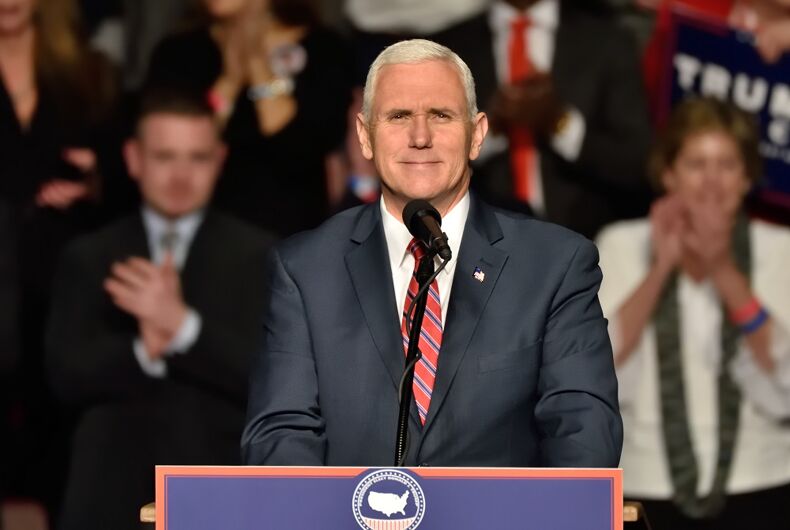 A gay-owned private club in Colorado will be hosting a pricey-fundraiser for Mike Pence and the Republican Party.

The Caribou Club in Aspen, Colorado, is owned by Billy Stolz and Richard Edwards, and it’s set to host a VIP-only reception with Pence this evening.

The reception will cost $35,000 per couple to attend. The Donald Trump campaign will receive $2700 from that money, and the rest will go to the Republican National Committee.

Bob Jenkins, the vice chair of Pitkin County Republicans, told the Aspen Times that he expects 25 couples to attend the fundraiser.

Pence has a long history of anti-LGBTQ policy from when he was a U.S. Representative, the governor of Indiana, and now as vice president. His many actions against LGBTQ community include supporting conversion therapy as a solution to HIV, voting against all LGBTQ legislation like hate crimes legislation and employment non-discrimination legislation, trying to create a religious exemption to state discrimination law in Indiana, speaking at anti-LGBTQ hate group meetings as a government official, and reportedly being one of the architects behind the transgender military ban.

Related: Mike Pence’s neighbors put up a clever banner to protest his homophobia

Jenkins said that it doesn’t bother him that a gay couple owns the Caribou Club, that Republicans can enjoy themselves no matter who owns the building they’re in.

Originally, Republicans refused to disclose the location of the fundraiser.

“This event is an intimate high dollar reception, and we would like you to participate if possible,” read the invitation Jenkins sent out to local Republicans. “Additionally, please quietly spread the word.”

“If people know, there will be protests,” he said. “Why do we Republicans want to create extra costs for the city of Aspen?”

But reporters at the Aspen Times found out in an unusual way: through a chef’s court records.

Miles Angelo is the executive chef at the Caribou Club, and he was arrested last Friday for allegedly choking and punching a woman in the face, according to his arrest warrant.

He appeared in court and asked to be released before the trial so that he could cook for the vice president on Monday. He was released on bond and has been ordered to stay away from the alleged victim.

Pitkin County Sheriff Joe DiSalvo said this past Friday that he didn’t know where the fundraiser was going to be held. He said that he wanted to know so that he could send someone the expected $10,000 to $20,000 security bill for his deputies’ work.

The owners of the Caribou Club have declined comment.