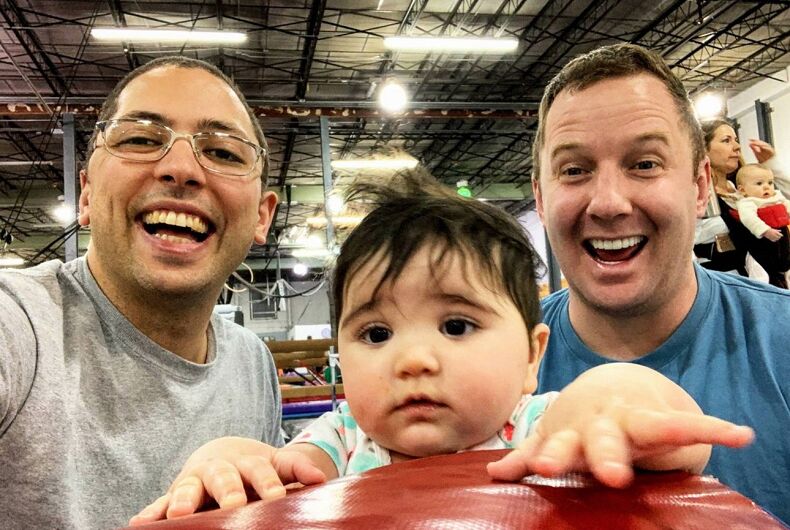 A gay couple is suing the State Department for refusing to recognize their daughter as an American citizen.

Derek Mize and Jonathan Gregg filed a federal lawsuit against the State Department because they are being forced to go through a lengthy process to get an American passport for their daughter Simone, who was born to a surrogate in England with the help of an anonymous egg donor.

Mize and Gregg are married, both are listed on their daughter’s birth certificate, and both of them are U.S. citizens.

A child born abroad to a U.S. citizen is automatically considered a U.S. citizen. But the U.S. government has applied a definition of parenthood to same-sex couples that not only requires a lot of additional paperwork and proof, but also makes it impossible for some gay couples to bring their children to the U.S.

Related: A gay couple’s kid can get U.S. citizenship after a historic ruling

The lawsuit, filed by lawyers from Immigration Equality and Lambda Legal, alleges that the State Department is violating the Immigration and Nationalization Act and not respecting the couple’s constitutional rights.

The couple met in 2014 in New York, got married in 2015, and moved to Georgia in 2017. A friend in England offered to be the surrogate mother for their child, and Simone was born in 2018 in London.

As they were preparing their taxes earlier this year, Mize went to get a Social Security number for Simone to claim her as a dependent. They were told to go to a U.S. embassy to get a consular record of birth abroad.

So the men traveled with Simone back to England and went to the U.S. embassy. They watched about 20 heterosexual couples in a similar situation get in and get out with the same paperwork that they had.

But when it was their turn, the State Department employee started asking invasive questions about how Simone was conceived. Three hours of waiting later, they were told that they couldn’t declare Simone to be a U.S. citizen.

A federal judge determined earlier this year that there is no law that requires a child’s biological parents to be married to each other for the purposes of citizenship.

Moreover, the State Department doesn’t do anything to determine if a child born to heterosexual parents is, in fact, both parents’ biological child. They don’t ask heterosexual parents if they used a sperm or egg donor, nor do they perform paternity tests to see if the man presenting himself as the child’s father is, in fact, the child’s biological father.

“In that moment, every anxiety I’ve ever had in my life about being gay and different came into my body and I just wanted to cry,” Mize told the Huffington Post.

“I was really starting to believe all that paranoia [about people not accepting his family] was unfounded.”

“The State Department’s policy is not only cruel, it is unconstitutional. The government refuses to recognize Jonathan and Derek’s marriage and all of Simone’s rights as a U.S. citizen,” said Aaron Morris of Immigration Equality.

“The fight for marriage equality is not over, and we will not stand down until the State Department changes its unlawful policy.”