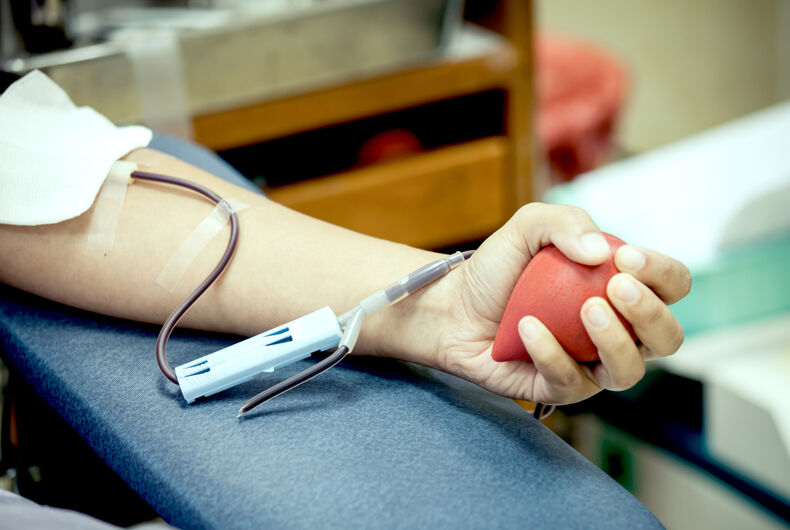 Blood donations are urgently needed in some areas and Facebook is using its service to help the Red Cross boost supply. In doing so, however, they are alienating gay and bisexual men who find the service’s choice to target them inappropriate.

Men who have sex with men, as well as many transgender people, are routinely barred from donating blood.

“On Facebook’s part, this seems tone deaf,” said Aaron Endre, a gay Facebook user interviewed by CNBC. Endre’s profile makes it clear that he is gay, but Facebook has been regularly targeting him to give blood.

Another Facebook user, Mark Milleville, was angered by Facebook’s notice.

“I’m angry that donating blood is still an issue for men who have sex with men and that Facebook is rubbing it in my face,” Milleville said.

“Our blood donation feature was developed to help increase awareness of the critical need for blood donation nationwide, especially given the declining donor pool and seasonal shortages our partners are experiencing,” said an unnamed Facebook spokesperson to CNBC.

The Red Cross also lauded Facebook’s efforts, saying that, the number one reason why people don’t participate is that they are not asked — and Facebook’s blood donation tool helps alert people about the critical need to help hospital patients.

They sidestepped the issue of eligibility, however, saying that that is not an issue of theirs, but of federal regulators. The American Red Cross is hamstrung due to the current U.S. Food and Drug Administration stance on blood donation.

The original blood donation ban was put in place in 1983 as a reaction to the HIV/AIDS crisis and barred men who have sex with men and transgender people from donating blood, deeming them “high risk” candidates.

Prior to a 2015 guideline change from the FDA, men who have sex with men were barred from giving blood for their lifetime, but even the current policy requires men refrain from sex for more than a year and does little to address the need for available blood.

The Facebook spokesperson noted that, “we don’t target people based on their sexual orientation or their ability to donate blood,” an odd omission from a company recently under fire for allowing ads to be targeted based on a user’s “ethnic affinity” and other categories that could lead to the propagation of racist and sexist advertising on the service.

Facebook began the US release of blood donation feature last month, allowing people to get notifications for local blood drives in Baltimore, Chicago, New York City, San Francisco and nearby areas, and Washington, DC. It was introduced initially in 2017 in Brazil, Bangladesh, India, and Pakistan.

Users of the service want better features of their own, allowing them to easily turn off this and other notifications that they find insulting — or for Facebook to use their own clout to change the rules.

“Facebook: your heart is in the right place,” said Endre on his Facebook feed. “We SHOULD be donating blood. And to that end, please use your power to help change blood donation regulations and send a message that #.”

Does Facebook keep asking you to donate blood, too? Yeah, it's problematic. Regulations in many places — the U.S….