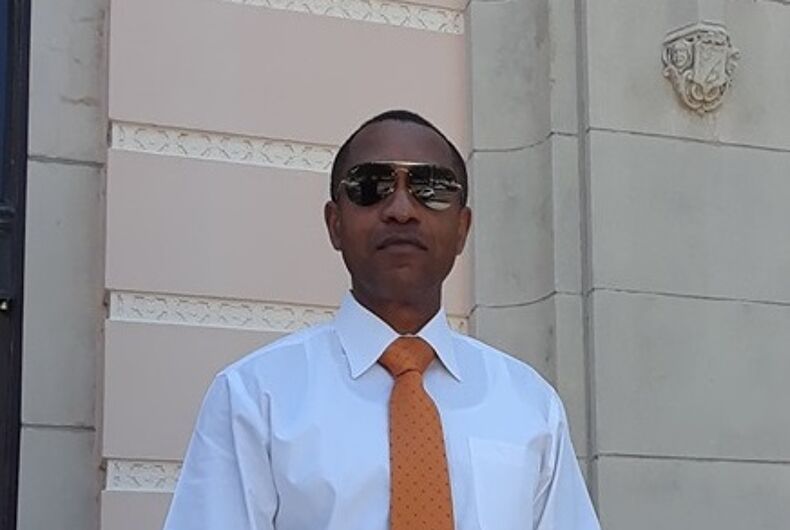 A city council candidate in Florida has been posting homophobic messages on social media.

In Facebook posts that appear to have been deleted, Cromartie wrote about his hatred of gay people.

“STOP PROMOTING HOMOSEXUALITY TO OUR CHILDREN,” one June post read, according to the Tampa Bay Times.

“I hear you south St. Pete! Finally we have a leader who’s not afraid to say, ‘Too hell with gay pride & their flag,'” another post said, possibly referring to the historically Black neighborhoods in South St. Petersburg.

“Wondering why your so called black leaders are quiet right now? They’re at the gay parade pledging allegiance to Pride for a few $.”

He did not explain how community leaders were making money at Pride in St. Petersburg.

His behavior on LinkedIn was similar. He wrote a post claiming that being gay is a choice, so gay people shouldn’t “receive taxpayer dollars,” referring to a resolution to fund a local study about government contracts to LGBTQ-, woman-, and Black-owned businesses. The resolution doesn’t actually disperse money to the business owners.

“The idea that the homosexuals should be considered to receive taxpayer dollars, based on the fact that they choose to be a homosexual, to me is not fair to the other citizens who choose not to be homosexual. And if I’m elected, I’m going to dismantle all those policies.”

His posts started getting attention last week, and he complained about the “vicious, hateful, and intolerant… homosexuals” who were leaving him comments.

“They claim to be all inclusive, love everyone, fair and harmless to society and to our children but these responses show just how intolerant they really are to opposition!” he wrote, in July 8, 2019.

He also claimed that the city of St. Petersburg has “a dominant homosexual city administration” that only gives “jobs, business incentives and affordable housing” to their supporters.

“Take a good look St. Petersburg because this is your Goliath and Thank God I am your David!”

I prefer to leave the insidious comments of homosexuals on my page to show residents just how vicious, hateful and…

In another post from July 11, he said he would oppose “any policy that implies or economically favors homosexuality, a group or any ideology based solely on a person’s choice to be homosexual and/or anti-American!”

His policy goals include solar energy and bringing a monorail to town. He did not explain how he would keep all the homosexuals off the monorail.

As a policy maker I will create economically fair and sustainable policies that will not favor ideologies, groups or…

“It makes me more popular as a leader,” Cromartie told the Tampa Bay Times about his beliefs.

“Because people understand I’m going to lead based on American principals. Not because they choose to be a homosexual.”