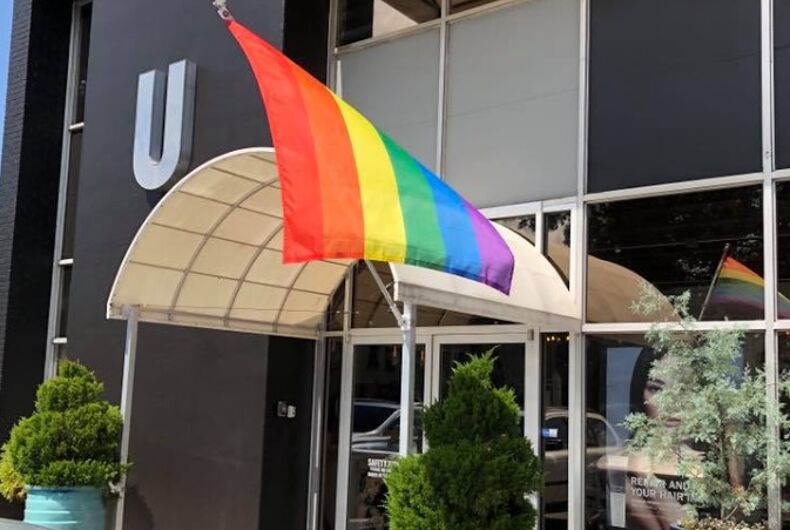 A hair salon received a threatening note not about its rainbow flag.

Issam Bajalia owns Salon U in Homewood, a suburb of Birmingham, Alabama. He said that he had just returned home from World Pride in New York City when he found a note taped to his business telling him to remove his rainbow flag “before it is too late.”

“We’re just very disappointed because our only crime[…] is we have a rainbow flag in front of our building,” Bajalia told AL.com.

“My thing is what is so offensive about a rainbow or a flag and how does this disrupt your religious journey?”

Bajalia said that he contacted the police because the note is a threat.

“I am not an alarmist by nature,” he said. “In fact I don’t feel threatened at all, however when you have situations like the Pulse Nightclub shooting, you can’t be too careful in today’s day in time. You don’t know.”

Police said that they added a patrol outside the salon and are looking for security footage from nearby businesses.

Salon employee Ryan Taylor posted about the note on Facebook.

“If you feel called by your faith to spread the word of God through fear mongering and intimidation, your belief system is flawed, it is fragile, and it is dangerous,” Taylor wrote the the anonymous note-writer.

“This flag is a peaceful symbol of freedom for the oppressed. It does not threaten your identity, or your safety. And yet, because of its mere existence, you’ve threatened ours.”

Dear Offended,If you feel called by your faith to spread the word of God through fear mongering and intimidation, your…