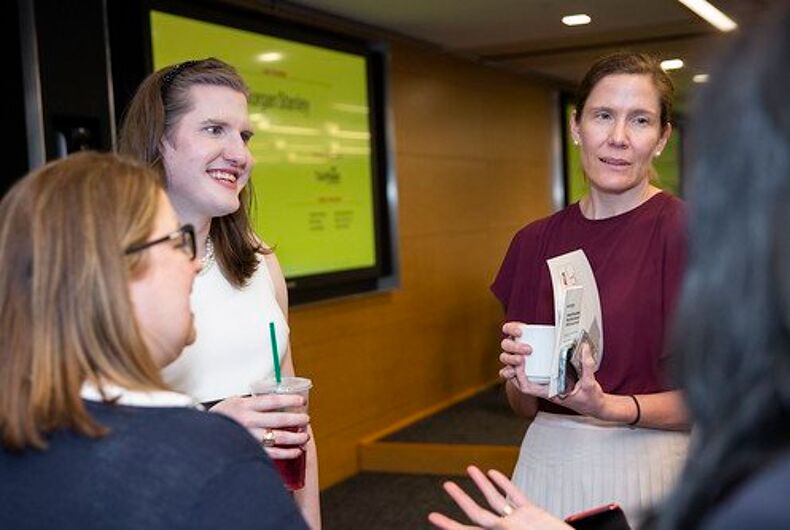 A transgender activist wrote an amazing Twitter thread about self-love after a picture of her was found circulating alt-right forums.

Charlotte Clymer is the press secretary at HRC and “TERFS and trolls” were sending her a picture of herself with another woman that she said was being distributed on 4chan and other “awful parts of the web.”

One 4chan user posted the image with a transphobic tirade where they misgendered Clymer and said that her “massive skull” and other features were “a joke only god himself could come up with.”

“I realize this is an effort to shame my general appearance and invalidate my humanity,” Clymer wrote. (The whole Twitter thread is below.)

“And I know this may come as a shock to many of you, but… I really love the way I look. I am genuinely confident in my own skin since coming out of the closet. I think I’m quite gorgeous.”

Related: Trans athlete shares journey with side by side prom pictures, goes viral

She said that she was “miserable” when people saw her as a man, even if people would compliment her on her appearance as a man.

“I would dress in nice suits with a clean haircut – look ‘normal’ – and it made me feel constantly anxious and depressed,” she wrote. “I hated compliments on my male appearance.”

She said that some people might find her unattractive in that picture that was circulating rightwing forums, but she sees “happiness and survival.”

Clymer had a message to the people who were mocking her picture: “I truly hope you feel this happy someday. I wish that for you. It’s life-changing to feel comfortable in your own skin.”

Oh, and that original picture, where the commenter on 4chan said that Clymer looked “threatening”? She said that the other woman “was very kindly praising my work and asked for advice on trans-inclusive policies.”

Celebrities, activists, and politicians loved what Clymer wrote and responded with uplifting messages of support that will leave you in tears.

Here is the original Twitter thread. Replies are at the bottom.

This image of me has been going around 4chan and other awful parts of the web with similar transphobic commentary. Over the past few weeks, I've had TERFS and trolls send it to me and even some friendly folks who want me to be aware it exists? So, I want to be clear… (thread) pic.twitter.com/sbfllTUYYs

And I know that the vast majority of folks probably don't find me particularly attractive. I guess that should bother me, but I'm at peace with it. I think back to when I was in the closet and presenting as a conventionally-attractive male and how consistently miserable I was.

Now, are there things I want to improve about my appearance? Sure, and that'll come with time, but if my choice was between what you see in that picture and being in the closet, I choose that beautiful woman every day without hesitation. I am proud of her. She survived.

This picture was taken from @TheNewAgenda's National Girlfriends Day event earlier this year, where I participated in a panel on women in the workplace. The young woman in that original pic was very kindly praising my work and asked for advice on trans-inclusive policies. ❤️ pic.twitter.com/8vcevcBfI1

You're absolutely right, Charlotte. Your confidence and grace inspires me, and I promise I'll continue fighting every step of the way until every trans American can live their best lives, free of fear and discrimination.

We could all take a lesson in grace and determination from you, @cmclymer. Thank you for inspiring all of us.

I’m so sorry those jerks were bothering you.

This is stupid for many reasons. One is that youre gorgeous. Another is that this idiot is expressing his preferences for what women should look like, as if they are facts about how women are. I'm a ciswoman who is probably like twice your size. Women come in different sizes!

All I see is my friend Charlotte. A beautiful, kind, generous, smart, funny, woman. 🥰

Your strength inspires me, @cmclymer. Don't ever stop speaking up.

A gay-owned club is hosting a $35,000/couple fundraiser for Mike Pence