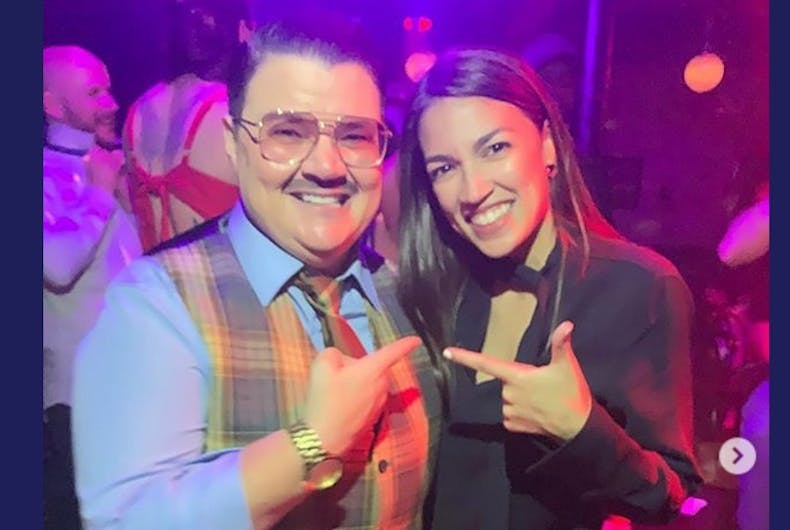 A member of the U.S. House surprised the audience at an LGBTQ show with an affirming message.

Representative Alexandria Ocasio-Cortez (D-NY) was spotted at the McKittrick Hotel in New York City this past Friday night. She was in the audience of Bartschland Follies, a drag and burlesque show produced by NYC legend Susanne Bartsch.

Drag and cabaret performer Joey Arias pulled Ocasio-Cortez on stage. She told the cheering crowd, “You are beautiful. You are accepted.”

She asked the audience to give a “big round of applause” for the performer.

“Alexandria O.Cortez and myself at BARTSCHLAND FOLLIES! I was gagging ! She’s Amaxing ! The place went wild ! Chanting her name!” Arias wrote on Instagram in a post with video.

Alexandria O.Cortez and myself at BARTSCHLAND FOLLIES! I was gagging ! She’s Amaxing ! The place went wild ! Chanting her name.!

Drag king Murray Hill also got a photo with the esteemed member of the House.

“In this pix, I’m saying, ‘I’m standing next to a future president!'” he wrote.

The inspiring and formidable @ocasio2018 attended the @bartschland Follies show @themckittrick last night in NYC. She brought hope to the room and showed us 🇺🇸 future! Her choice words, “Be who you are. You are beautiful. You are accepted.” 🏳️‍🌈 In this pix, I’m saying, “I’m standing next to a future president!” The 2nd pix, I’m thanking her for her work, speaking out, and fighting the good fight. #aoc #4thofjuly #resist #showbiz

“None of us in the cast were feeling too patriotic this July 4th weekend, but her presence alone gave us all a much needed dose of hope,” Murray Hill told NBC News.

“She reignited the fire that’s burning in all of us. She stayed and watched the entire show starring New York’s finest misfits, nightlife creatures, rabble-rousers, queer icons.”

About Ocasio-Cortez’s message on stage, Murray Hill had one thing to say: “Mic drop.”