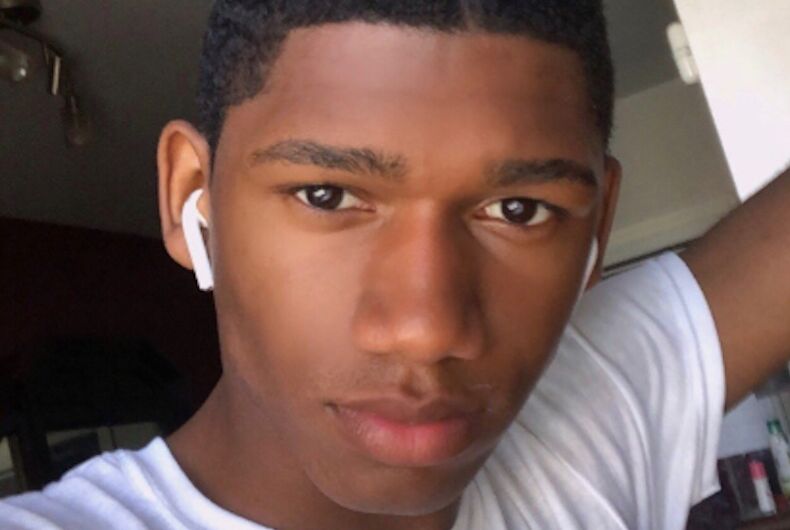 During his valedictorian graduation speech, a high school senior named Mason Bleu announced to his class that he is bisexual.

In his speech, Bleu said:

“I want to end this speech by saying the only way we can make change is by being educated. I want to remind all of you to always be proud and to always remain humble. Be proud of what you’ve accomplished, be proud of who you are. Continue seeking knowledge and most importantly find ways to educate yourself.

I’ve struggled to be proud of something all my life, and since I’m preaching about being proud today, it’d be hypocritical of me to continue hiding. Not some people like getting emotional so saying is is extremely personal and hard.

‘For a long time, I’ve struggled with my sexuality. I’ve dodged it and ignored it because I wasn’t proud of who I am. But today I’m changing that. I’m proud to be a bisexual man.”

At this point, the crowd cheered loudly. Some fellow graduates in the audience stood up to applaud him as did many of the teachers and administrators behind him.

Related: Valedictorian of Utah’s most homophobic university comes out during graduation speech

One adult onstage even gave Bleu a hug. Then he continued:

“I’ve struggled with being proud of myself for a long time because I was afraid that no one else would be proud of me and for me.

The audience then applauded again, and he concluded his speech:

On a final note, I want to remind you that the one thing no one can take from you is in here (points to his head). Your futures are all so bright. Thank you so much and happy Pride!”

Here is video of his speech:

So I came out during my valedictorian speech. It was definitely the scariest thing I’ve ever done but the reaction was amazing. Thank you to everyone who supported me! #Pride2019 #LGBTQ pic.twitter.com/u8ih03NTJd

In a series of subsequent tweets, Bleu wrote, “I did this not only for me but for anyone else who has struggled being closeted. With that being said, you’re not alone. Reach out to me or anyone else you trust. I’ll definitely be willing to talk to anyone.”