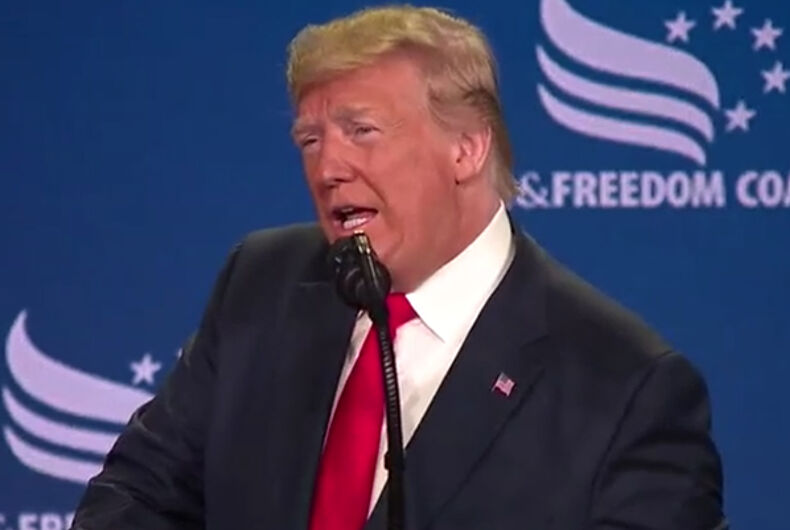 Yesterday was the anniversary of three major LGBTQ court victories, and Donald Trump chose to “celebrate” them speaking at an anti-LGBTQ conference.

To mark a day important to LGBTQ people, Trump chose to address the Faith & Freedom Coalition’s “Road to Majority” conference.

The conference addresses a number of social issues and its website describes marriage as “a sacrament of faith, a reflection of God’s perfect plan for humanity and the living embodiment of Jesus’ love for the church and the church’s devotion to Him.”

The Faith & Freedom Coalition, which runs the conference, supports the First Amendment Defense Act, a bill that would make it illegal for the government to take action against people who discriminate against LGBTQ people as long as the discriminator says they did it because they have a “religious belief” that marriage is “the union of one man and one woman.”

The Faith & Freedom Coalition was founded in 2009 by Ralph Reed, who also founded the Christian Coalition. Reed has a long history of anti-LGBTQ statements, including calling workplace protections for LGBTQ people “a dagger aimed at the heart of religious freedom for millions of Americans” and that the U.S. v. Windsor court decision in favor of marriage equality was an “Orwellian act of judicial fiat.”

Reed has recently started trailing out presidential candidate Pete Buttigieg on the campaign trail to heckle and demean him for being gay. In April he staged a protest outside one of Mayor Pete’s rallies that featured a Buttigieg impersonator flogging Jesus as Satan cheered him on. He also shouted insults and anti-gay slurs at the candidate.

So it’s no surprise that Trump didn’t discuss any of the Supreme Court decisions that LGBTQ advocates were celebrating the anniversaries of when he addressed the conference yesterday, according to the Washington Blade.

Instead, he bragged about his over 140 judicial nominees who will give movement conservatism victories in court.

“When I asked for your support in 2016, Americans of faith were under assault,” Trump said. “But the shameful attempt to suppress religious believers ended the day I took the oath of office.”

That ‘Straight Pride’ parade is actually happening. This is why we can’t have nice things.