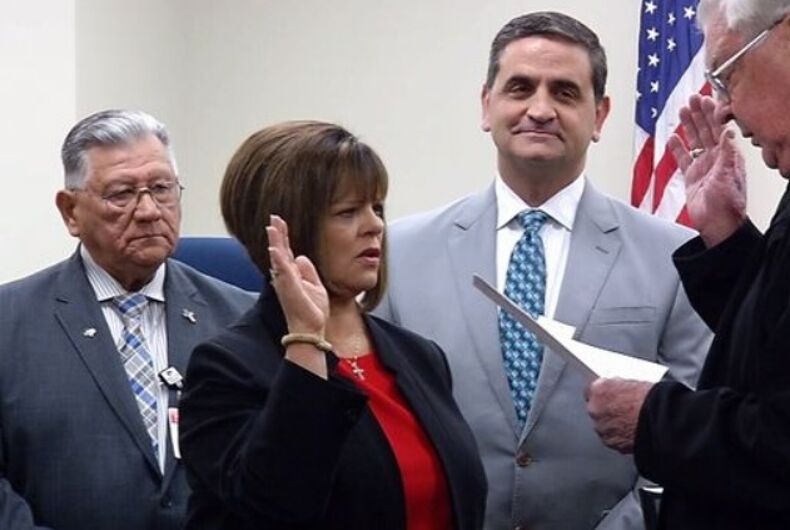 A county commissioner in Texas has come under fire for refusing to sign a Pride proclamation.

“I want it in the record that I do not support this proclamation or agree with the statements in it,” she stated.

Some people at the meeting supported her.

“What she said was just right. She didn’t say it in so many words, but right is right and wrong is wrong, according to God’s word,” resident Joyce Peardon, who attended the meeting, told KIII-TV after.

Vaughn said that LGBTQ are required to “respect” her opposition to pride.

“They have a right to [their] beliefs and they have to respect mine and my beliefs,” she told KRIS-TV. “It has nothing to do with [LGBTQ people]. It’s just my beliefs and I wasn’t going to support them.”

“Just because you are the LGBTQ or whatever it’s called community doesn’t mean I have to suck it up and support it,” she added, stressing how not-homophobic she is.

But others said that she wasn’t representing all the people in Nueces County by voting against the proclamation.

“People always have their own views,” said Bill Hoelscher of the Mosaic Project of South Texas. “Bigotry is something that, it’s hard to fight. I would suggest that people are uncomfortable with our community or feel we don’t belong get educated.”

This isn’t the first time Vaughn has expressed homophobia in office. In 2016, when she was a Corpus Christi City Councillor, a proposal was brought to the City Council to put rainbow color lights on a bridge in memory of the victims of the Pulse nightclub shooting in Orlando, Florida.

According to the Caller Times, she opposed the lighting and spoke out in a City Council meeting “in condemnation of homosexuality.” She wrote a separate proposal for red, white, and blue lights “to send the message that the Orlando victims were Americans.”

Its Pride month & I have never been so afraid. I live in Malaysia.