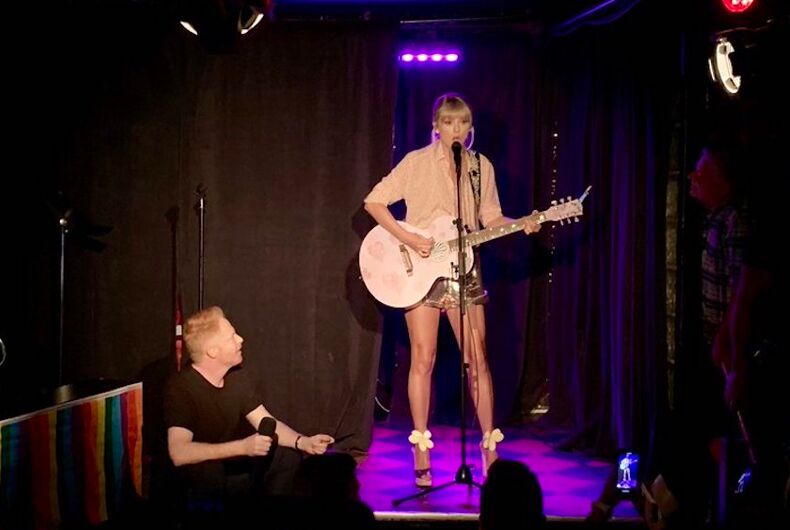 Taylor Swift recently showed her support for LGBTQ fans by dropping a new single, “You Need to Calm Down,” which directly addresses queerphobes. She also held a surprise performance at the historic Stonewall Inn last night, playing a few covers and one of her hits as New York City prepares for its World Pride celebration later this month.

Variety reports that after performing two songs by Sara Bareilles “including a version of ‘Brave’ that had virtually all of the 100-odd lucky people inside singing along,” Swift was “greeted by the evening’s headliner, Modern Family star Jesse Tyler Ferguson.”

After thanking him, she said, “I heard ["Shake It Off”] is Jesse’s favorite song to do at karaoke — which is an incredible rumor, I really want to believe it’s true. So if there’s anything you (Ferguson) feel like you want to jump in on, a part that you’re really good at, just sing, dance and be yourself — this is a really safe space!”

She then played the song.

Here’s video of her performance at the Stonewall Inn:

Swift’s new single has drawn both praise and criticism for helping increase donations to GLAAD, the LGBTQ media watchdog organization name-checked in the song, and for writing a lukewarm and somewhat tone deaf wannabe gay anthem years after Lady Gaga’s 2011 song “Born This Way.”

Regardless of your opinion on her new single, Swift has increasingly shown herself to be an outspoken LGBTQ ally. In the October 2018 midterm elections, she voiced her opposition to anti-LGBTQ Tennessee Republican Representative Marsha Blackburn (who ended up winning her election anyway). She also cut a check for $113,000 to the Tennessee Equality Project to fight several anti-LGBTQ bills that have been introduced in the state.