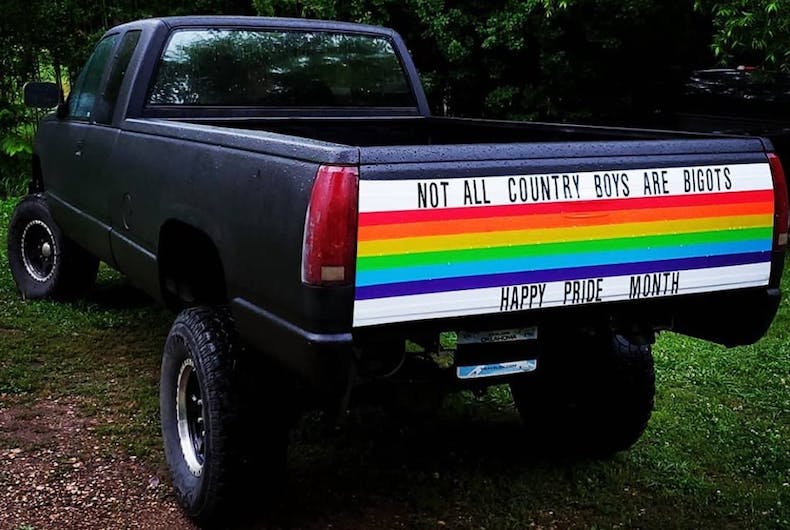 Hulbert, Oklahoma is a small town with a population of 590 located in the northeastern county of Cherokee, a region where 60.61 percent of voters chose Donald Trump. In short, it’s not the sort of place you’d expect to welcome LGBTQ people.

But one straight male resident, Cody Barlow, has decided to show his support for queer people by putting a rainbow and an important message on the back of his truck: “Not all country boys are bigots — Happy Pride month.”

In a public Facebook post (which since been shared over 46,000 times with over 9,300 comments), Barlow wrote that he “simply bought rolls of brightly colored duct tape and ran them across my tailgate in the design of the pride flag, and added some mailbox letters.”

“This is important to me, not only because I have family and friends that are LGBTQ+, but also because countless people have dealt with hatred and judgement simply for who they are, and/or who they love, for far too long. Obviously doing this isn’t going to change the minds of those who are intolerant, but hopefully it can help drown out the hatred with love.

I live in a rural area in Oklahoma, surrounded by small towns in every direction, and I’m sure this is not a very welcome message around here, but this is going to be displayed on my truck for the entire month of June in support of pride month.

I don’t think it is necessary to say, but for all intents and purposes I am a straight man that grew up here in Oklahoma. I love taking my truck mudding, going fishing, swimming at the lake, floating the river, and several other “country” activities.

It doesn’t matter what negativity I receive for supporting this. I hope that this can help even the slightest bit to encourage and support at least one person that needs it.

I hope everyone finds their inner strength to finally live life loud and proud without regard for the negativity of ignorant people.

Red states like Oklahoma often get bad reputations for being conservative and close-minded havens of hate, mostly because of their prejudiced state legislators and religious leaders. Just last year, Oklahoma passed a bill allowing discrimination against same-sex couples looking to adopt.

But according to the 2000 U.S. Census, there are at least 8,200 same-sex couples living in Oklahoma and at least 26 percent of them are raising children under the age of 18. In fact, Cherokee County has at least 24 same-sex couples within its borders, meaning the small rural area may be much more queer than even its residents realize.

While Hulbert and Cherokee County residents may not see much outward hatred against queer people, it’s always nice to have visible allies willing to cheer on our rights.