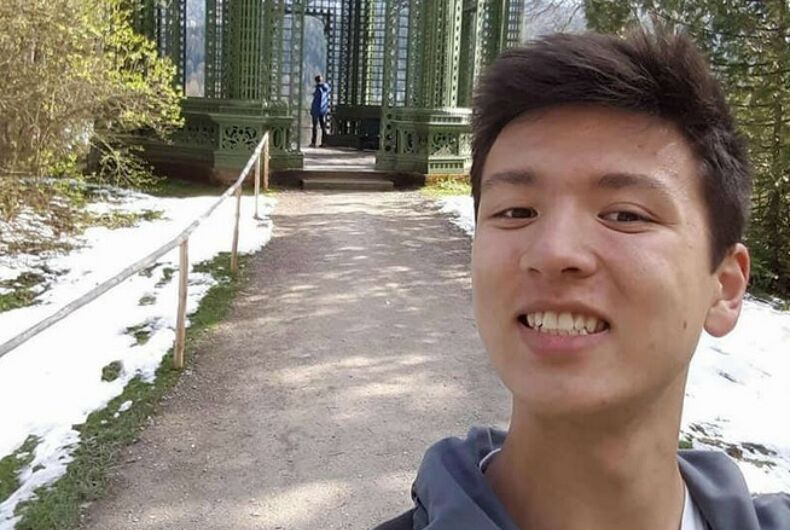 A school in Wisconsin has been accused of preventing their valedictorian from delivering his speech at commencement because he’s gay.

Nat Werth graduated first in his class at Sheboygan Lutheran High School. He was going to deliver the valedictorian’s speech, until school administrators read a draft.

“On my own journey to self-acceptance, I have trekked through the depths of depression, found that God’s love is endless, and embraced the fact that I’m gay,” Werth planned to say in his speech.

“Absolutely no one should have to go through what I have gone through simply to come to the conclusion that homosexuality is not a sin. God created everyone just the way they are and never intended for the church to disenfranchise an entire group of people.”

The speech went on to say that homophobic readings of the Bible are “outdated, mistranslated, or misinterpreted in their respectively Biblical, cultural, and historical contexts.”

Related: Gay valedictorian delivers coming out speech that was blocked by school

“The Bible mentions ‘love’ over 500 times,” Werth’s speech continued. “I sincerely believe that the next generation of Christians will eradicate homophobia in the church and proclaim God’s love to the LGBT community.”

Werth said that when he handed in the draft he “wanted to work together” with the administration to make a speech that they would approve of, but they said that they didn’t “trust” him to deliver anything they could agree to.

So he had to watch the salutatorian deliver a speech in his stead.

This isn’t the first time Werth has faced discrimination at his school. He said that he was banned from joining the dance team because he’s a boy and that teachers said on multiple occasions that homosexuality is an “abomination.”

The school’s executive director, Paul Gnan, did not comment on this situation but said that the school’s policies are based on biblical principles.

“There are policies in our handbook that talk about our faith and our belief system and what it’s based on,” he told the Sheboygan Press.

The handbook does not mention homosexuality or LGBTQ people specifically, and the school does not have any LGBTQ clubs like a gay-straight alliance.

“It’s degrading and it makes a person feel terrible about themselves,” Werth told WISN.

He said that he took his story to the media because “I don’t want anyone to have to go through what I went through again in the future.”