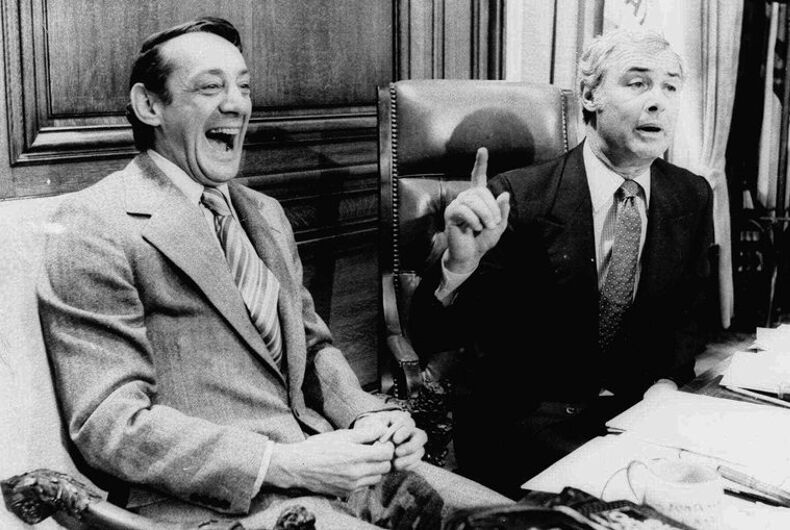 In this April 1977 file photo, San Francisco Supervisor Harvey Milk, left, and Mayor George Moscone are shown in the mayor's office during the signing of the city's gay rights bill.

It was an unlikely partnership.

George Moscone was a straight Catholic school graduate who grew up in an Italian-American neighborhood in San Francisco, handsome and naturally charming, a lawyer who first ran for office at age 30. Harvey Milk was the gay, Long Island-born son of Jewish parents, teased as a child for his prominent ears, a brash camera shop owner who didn’t run for office until his 40s.

Yet the two men found that not only did they like each other, they could also help each other politically—Milk by convincing the increasingly influential gay community to vote for Moscone, and Moscone by appointing Milk and other allies to positions of influence and by backing equality legislation. Moscone’s allyship gave the burgeoning movement lift at a critical time.

As the half-century anniversary of Pride approaches in June, it’s worth looking at one of the first gay-straight political partnerships of the modern era, one that would make it safe to advocate for the LGBTQ community from the outside.

Moscone was born in 1929 at the start of the Great Depression. His parents separated when he was 9 and he was raised by his mother, who struggled to support the family. He starred on his Catholic high school’s basketball team and got through college on a basketball scholarship. He then put himself through law school and did a stint in the Navy before starting a private law practice. Along the way, he married Gina Bondanza, whom he had known since grade school, and they eventually had four children.

In 1960, he ran for California State Assembly and lost—but the charismatic Moscone had put himself on the map. Three years later, he was elected to the San Francisco Board of Supervisors, the city’s legislative body. In another three, he won a seat in the State Senate, taking office as Ronald Reagan became governor.

Moscone was soon chosen as majority leader and despite the Republican governor, helped push through a number of progressive bills, including ones for early childhood education, a school meal program, prisoners’ rights, clean air and water, and the country’s first bill allowing abortion in cases when the mother’s life was in danger.

Moscone also became the Senate co-author of legislation introduced by Assembly Member Willie Brown to decriminalize sodomy and other private sexual acts between consenting adults. After multiple attempts, the legislation passed in 1975, aided by Moscone’s plan to lock senators in the Senate chamber until Lt. Gov. Mervyn Dymally could fly in from out of state to cast the deciding vote.

When Moscone ran for mayor of San Francisco in 1975, he stressed in his announcement that his campaign would include “all types of people.” San Francisco, he said, “is a city of talented women; and Blacks and Latinos; of Asians; of young and old people; of gays and straights; immigrants from all corners of the world.” His administration continued in that vein of inclusion, and he solicited the input of neighborhood and minority groups to help put a diverse array of people on the city’s all-important commissions.

Another of Moscone’s early acts as mayor was to appoint Charles Gain as police chief. Gain was a reformer who was not popular with the conservative rank and file, but whose outreach to the black and gay communities aligned with Moscone’s positions. After taking the job, Gain told a reporter for a gay paper that he would support any gay officer who came out. The remark made national headlines and caused tension within the department; nevertheless, Gain began actively recruiting gay officers.

In 1976, Moscone supported a new districting plan that would make the Board of Supervisors more representative of the city’s diverse neighborhoods. As a result, the 1977 elections saw the first Chinese American, Black woman, and single mother become supervisors, along with the first openly gay elected official in California—Harvey Milk.

The next year, Moscone helped Milk and a coalition of activists by speaking out against an initiative proposed by State Sen. John Briggs that would have banned gay people from working in public schools. The bill was soundly defeated.

Moscone also gave public support to Milk’s landmark 1978 bill to ban discrimination in employment, housing, and public accommodation based on sexual orientation. The New York Times called the bill “the most stringent and encompassing in the nation,” showing “the growing political power of homosexuals.” The only one of the 11 supervisors to oppose it was Dan White, a conservative former police officer and fireman.

White later resigned after repeated clashes with Moscone, including opposition to Moscone’s efforts to integrate the police and fire departments. He then tried to get Moscone to reinstate him, which the mayor refused to do. On November 27, 1978, White climbed through a window of City Hall to avoid the metal detector, shot Moscone in his office, then went to the suite of supervisors’ offices, where he shot Milk, killing both men. Incredibly, he was charged with manslaughter instead of murder and sentenced to only seven years, based on the now-infamous “Twinkie defense”—the assertion that White was incapacitated by depression, as evidenced by his diet of sugary foods.

When the gay community and allies erupted into riots in the wake of White’s light sentence, Gain (the police chief appointed by Moscone) refused to let the police attack rioters, a stance that the San Francisco Police Officers Association later criticized as too soft—but which, one might speculate, would have met with Moscone’s approval.

Moscone had also shown his support for the gay community in smaller but significant ways, issuing the city’s first mayoral proclamation for the Gay Freedom Day Parade, now the Pride Parade, in 1976, and ordering the City Hall flag flown at half-mast to honor a gay man killed in a street attack the next year.

Moscone’s full legacy is beyond the scope of this piece, but his support of the gay community was not the least of it. He used his power to open doors for those like Milk, Martin, and Lyon, and to support their efforts to make change for their communities—a change that rippled out to affect the entire country. They might have succeeded without him, but would likely have had a longer, harder road.

At a 1998 memorial service marking the 20th anniversary of Moscone’s death, his son Jonathan came out as gay, telling the crowd gathered at San Francisco’s War Memorial Opera House: “I wonder how he’d feel … and I only come up with one word: proud.”