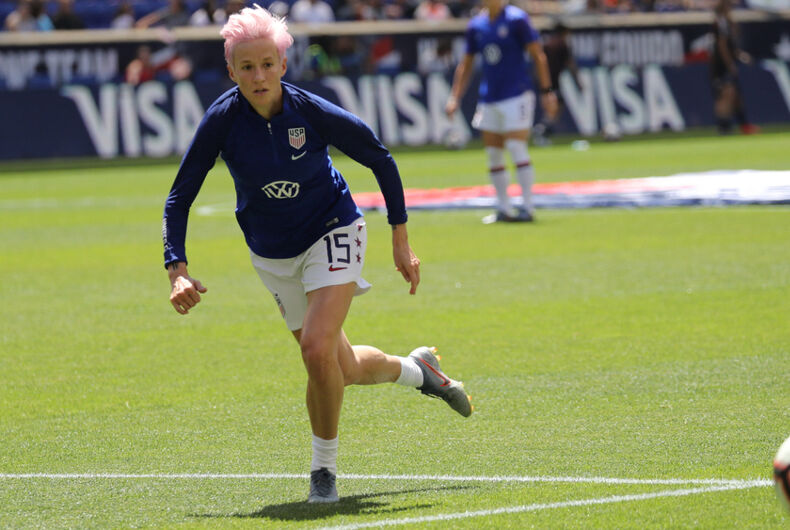 Among the 24 international teams currently competing in the 2019 FIFA Women’s World Cup (WWC) soccer tournament, at least 30 players are lesbian and bi women — the highest number of out players ever to participate in the international sporting event. During the last WWC, the number of out participants was 18.

While you can read the full list at the LGBTQ athletics site Outsports, the Netherlands and U.S. have the most out players with 5 out lesbian and bi women each; England has the second most with four.

The total number of lesbian and bi players is probably much higher than 30, but some players probably can’t come out because they live in conservative countries or even ones where same-sex encounters are illegal, like Cameroon, Jamaica and Nigeria.

But it’s still astounding when you consider that none of the men playing at the 2018 World Cup were out as gay or bisexual. Also, considering the sexism, institutional discrimination and lack of government support many women face around the world, it makes these queer women playing on the world stage even more remarkable.

Related: A gay college soccer player filed a Title IX complaint when a fan called him a “fa***t”

Among the most famous is out lesbian U.S. player Megan Rapinoe who was also one of the 42 LGBTQ athletes who played in the 2016 Olympic Summer Games in Rio de Janeiro — she and her teammates were subject to anti-gay chants by fans there.

After the Olympics, Rapinoe revealed her relationship with all-star WNBA basketball player Sue Bird. Rapinoe has since become known for kneeling and remaining silent during the National Anthem at matches and for suing the U.S. soccer federation for gender-based discrimination that favors male players.

Paris, France — where the WWC is being held — was also the site of the 2018 Gay Games, the quadrennial LGBTQ sporting event where people of all skill levels can participate.