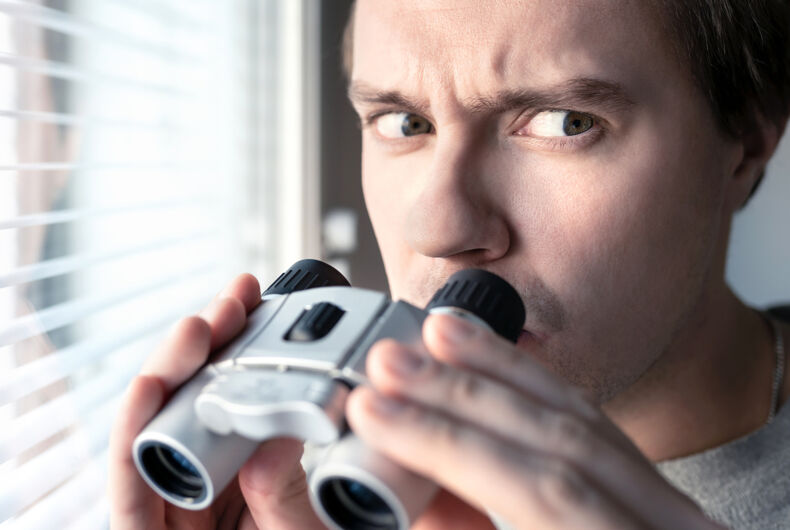 How do you know when your “ex-gay” program is a full-fledged cult? Activist Robert Oscar Lopez answers this question by offering a grueling list of hoops he jumps through during LGBTQ Pride month, lest he find himself gyrating on top of a rainbow tasseled Pride float.

At first glance, his screed appears to be a hilarious parody, a bizarre 10-step program that reads like a cult manual. What Lopez unintentionally proves is that there is no such creature as an “ex-gay.” Such people are basically tortured individuals suffering from debilitating guilt and shame who must take drastic measures to keep from sliding into authenticity. Let’s explore the extraordinary steps Lopez endures to maintain his facade.

1. Stay away from LGBTQ Pride events: Lopez warns, “Make plans to stay away. Once you see men dressed in nothing but air-open chaps or lesbian dominatrixes, you can’t unsee these images. So avoid them entirely.”

When I drive by a heterosexual strip joint on the way home from work I have no desire to step inside. It doesn’t turn me on. If Lopez were actually straight, why would he be tempted by Pride events? What he’s accidentally revealing is the flimsy and ephemeral nature of his alleged sexual conversion.

If “avert your gaze from the gays” is the best your “ex-gay” program can offer, it’s essentially useless and only a matter of time before such people revert back to their true selves.

2. Call your cable company and discontinue your cable service: Lopez says, “There are many things you can do to spend your spare time, which do not involve watching Hollywood and Manhattan liberals lie to you about the wonderful benefits that legally sanctioned sodomy brings to great nations.”

If you have Netflix or cable movie channels, you know that there are literally more movies than one could watch in three lifetimes. You don’t have to watch movies with gay themes or even gay characters. Yet, Lopez and others like him are so weak-minded and unchanged in their sexuality, that the only way they can keep from watching movies with queer themes is to do away with their entire cable package.

Such extreme overreaction and social isolation fits the classic definition of a cult.

3. If you have a family, spend close time with them:  Lopez writes, “Don’t try to get involved with a lot of June events that involve socializing with other kids and their parents, because during Pride Month, gay and lesbian parents are especially insistent upon bringing their adopted children to events and demanding that everyone bow down to the moral legitimacy of their home arrangements. Go to state parks that don’t do events, or playgrounds that are often unused.”

Once again, like a cult leader, Lopez recommends that his adherents remove themselves from society. They must live in a self-reinforcing cocoon that keeps them from fully experiencing the world. The real fear is that he and his followers will see loving gay parents and healthy children — putting a monkey wrench in the homophobic propaganda. God forbid they start questioning what God forbids and they have to think for themselves!

4. Pray a lot: Lopez advises, “Find a nice area in your home to turn into a prayer station.”

Lopez can pray all he wants. But apparently, God has endorsed the dramatic worldwide growth of LGBTQ Pride, yet hasn’t stopped Lopez and his depressed followers from being too tempted to watch cable TV in June. Hmm, maybe God is sending a message?

5. Fast. Lopez writes, “Fasting is biblical as well as good for you health-wise…avoid going to supermarkets or eating in establishments smothered in Pride propaganda and tacky rainbow flags.”

Of course, we all know that rainbow supermarket displays mixed with cucumbers and eggplants is kryptonite for “ex-gays.” Seriously, this is just weird, classic cult behavior.

On the bright side, we will find out if man can survive on communion wafers alone.

6. Don’t take calls from your pro-gay or gay relatives: Lopez says, “Most of you can probably relate to the phenomenon of the annoyingly pro-gay relative. If they are not gay themselves, they have tons of gay friends and love to needle and provoke you with references to gay events, gay relationships, or worst of all, gay politics… I make a point not to get on the phone with any of these people during the month of June… I plan to call them back on July 1, just before the fourth of July, and catch up on things during the patriotic and pro-military esprit of the next month.”

We are starting to see a cult-like pattern here. Living an “ex-gay” lifestyle is to avoid being challenged at all costs, lest you receive information that conflicts with your washed brain. Although, something tells me that Lopez isn’t too popular at the holiday dinner table. Especially on Thanksgiving when he insists on preaching to relatives and then taking home the big, juicy turkey drumstick.

7. At work, focus on projects that you do, which will allow you to avoid Pride overload. Lopez writes, “Depending on where you work, you may run the risk of being ambushed on the job by gay colleagues or ‘safe space allies’ pushing Pride on you at every turn.”

Wow, talk about a snowflake! Lopez is so insecure that his co-workers simply talking about safe-spaces makes him feel unsafe. He is so unconfident of his “change” that he confuses an invitation to gay-positive events with an “ambush.”

8. Try not to talk about Pride unless you are speaking with someone who you know agrees with you about homosexuality being a sin:  Lopez writes, “June is a collective descent into tribal psychology. There is no point in trying to reason with people who are revved up by the month’s hysteria.”

Interesting observation. The most Pride hysteria I’ve seen all month is Lopez’ ridiculous article. (Unless you count that straight couple with a bb gun that caused a stampede at DC Pride)

9. Take time during June to speak positively about moral courage: Lopez says, “Without necessarily getting into the debate about homosexuality, try to give support to those Christians who stand up to the LGBT lobby during the month of June.”

LGBTQ people are a small minority who aren’t fully protected in 30 states from being fired from their jobs because of their sexual orientation. Opposing LGBTQ rights is not moral courage, it’s cowardice.

To be anti-LGBTQ is not brave, it’s bullying. Nothing is as cute as when the powerful fundamentalist Christian lobby dresses up and poses as victims.

10. Revel in your heterosexuality during June. Lopez writes, “If you are married, make love to your spouse as much as you can… If you are single, go out and ask someone of the opposite sex for a date. Go on a date somewhere upbeat but romantic, tucked away from urban centers full of Gay Pride hysterics.”

The”ex-gay” cult is absurd and laughable. It also seems to be a full-time job to avoid temptation with no end in sight.

Wouldn’t it be easier to simply come out, live with integrity, have sex with whom you’re actually attracted and not be forced to eat at a suburban Red Lobster, while praying the waiter isn’t gay?