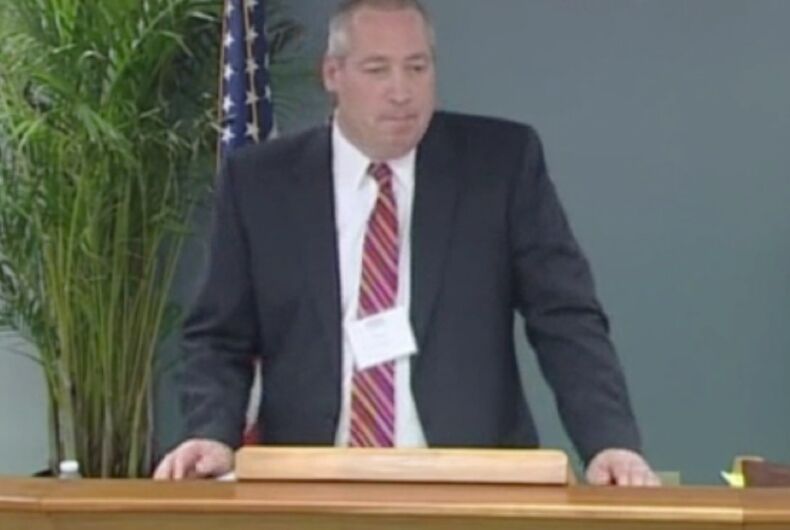 A Tennessee district attorney is under fire after he was recorded telling a Bible conference that he was a “good Christian man” and therefore discriminated against gay couples.

Craig Northcott, the district attorney general of Coffee County, says on the recording that he refuses to prosecute gay domestic violence cases because he doesn’t believe the relationship is moral. Video of Northcott’s speech was released by Nashville television station News Channel 5.

“The social engineers on the Supreme Court now decided we have homosexual marriage. I disagree with them.”

Tennessee law doesn’t mention the gender of domestic violence offenders or victims and being married is not a requirement. It requires enhanced punishment like taking away an offender’s right to own a gun. The law covers “individuals who previously had or currently have a sexual relationship or people who previously or currently live together.”

Northcott, however, told the crowd the law was meant to “recognize and protect the sanctity of marriage.”

“There’s no marriage to protect with homosexual relationships, so I don’t prosecute them as domestic,” told a reporter when asked to comment on his statement.

“The scariest part of [the video] is that there are people whose cases have been affected, but they didn’t know why they were treated differently,” Chris Sanders, executive director of the Tennessee Equality Project, told the Washington Post. “Now, we do.”

Alabama mayor calls for the nationwide execution of ‘homosexuals’ & ‘transvestites’

A trans Starbucks employee was misgendered on the job. Starbucks says it isn’t harassment.