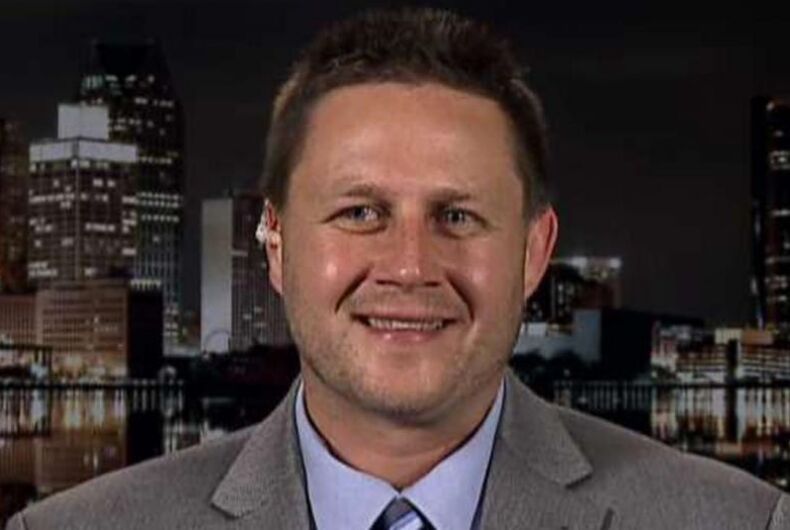 Pete Buttigieg’s brother-in-law, Rhyan Glezman, recently went on Laura Ingraham’s Fox News show The Ingraham Angle to claim that a recent Washington Post story about Buttigieg’s husband being disowned by his family for being gay is being “spun for political advantage by Pete Buttigieg and … hurting” Chasten’s family.

Before we get to Glezman’s comments on Fox News, the Washington Post story said when Chasten came out during his senior year in high school, his mom cried and asked if he was sick, and his brother (Glezman) said, “No brother of mine…” Afterwards, Chasten basically became homeless for a year.

The story noted that Glezman later became a pastor of a Christian church in Clio, Michigan. Glezman told The Washington Post, “I want the best for him. I just don’t support the gay lifestyle.”

On Ingraham’s program, Glezman says since the article ran, his family has been targeted by hateful messages, including one suggesting that Glezman kill himself.

Glezman told Ingraham that the entire article “couldn’t be further from the truth,” adding, “There has absolutely never been any amount of shunning him from the family. I love my brother dearly, I want the best for him, I want the best for Pete.” He also said he has no recollection of Chasten ever being homeless.

When asked why his brother would make up such a story, Glezman said, “In such a competitive … large Democratic field of candidates, you need to have a story… to gain political points in the polls.”

Glezman added that while he respects Pete’s important role as the mayor of South Bend, Indiana, he doesn’t think it has prepared him to be president.

When Ingraham asks Glezman why he came on her show to straighten out the record rather than just calling his brother and brother-in-law, Glezman evasively says, “Communication would have already been done [with Pete and Chasten about the story] if it was just that easy.”

He then mentions that he last spoke to Chasten a year ago at their grandmother’s funeral. Glezman then adds the family dynamics have been rocky for “nine to ten years” ever since he became a born again Christian.

“If there was any shunning, to be honest with you, to share the truth, that would be myself being shunned over my brother,” Glezman said.

The interview is all the more interesting considering that Ingraham had a strained relationship with her gay brother Curtis because of her own homophobia.

Correction: An earlier version of this article said Ingraham’s brother is dead. He is not.

A news anchor came out on air & announced her engagement. Now her fans love her even more.

Jeanne Manford was not just the ultimate ally. She was our mom.