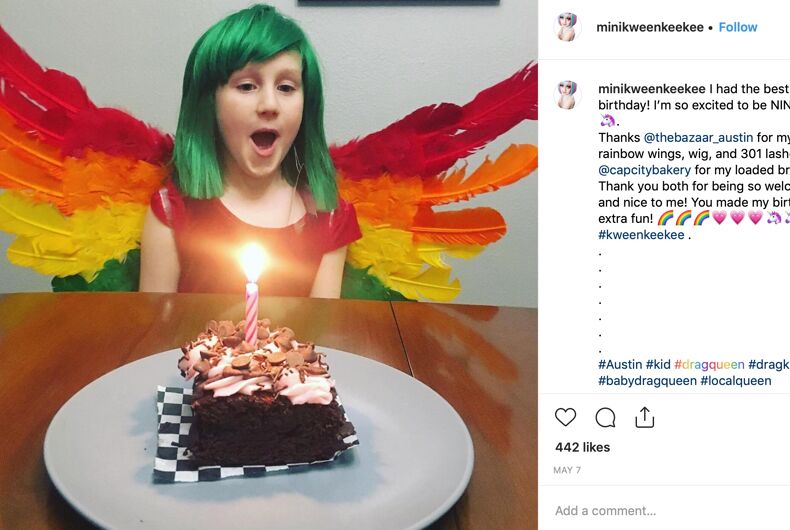 “I want the world to know that you can be special, and you can be who you want to be,” she told KTRK-TV. “You can be a vegetarian, you can even be a veterinarian. You can be LGBTQ. You can be a drag queen, drag king.”

Outside of drag, Kween KeeKee is a third-grader known as Keegan and uses he pronouns.

Related: Watch this drag queen’s live performance cause an audience meltdown with her very first note

His mother describes Keegan as “gender creative,” and one look at his Instagram account – administered by his parents, of course – can tell you why.

I had the best birthday! I’m so excited to be NINE!!!! 🦄. Thanks @thebazaar_austin for my new rainbow wings, wig, and 301 lashes and @capcitybakery for my loaded brownie. Thank you both for being so welcoming and nice to me! You made my birthday extra fun! 🌈🌈🌈💗💗💗🦄🦄🦄 #kweenkeekee . . . . . . . . #Austin #kid #dragqueen #dragkid #babydragqueen #localqueen #dragqueensofinstagram #instadrag #genderfluid #nonbinary #gendercreative #lgbtyouth #lgbtq #rainbow #wings #wig #birthday #happybirthdaytome #vegan #atx #austintx

Growing up in a fairly conservative suburb outside Austin, his parents worried about how the community would react to their child.

“We expected a lot of push back from the school and we expected some intolerance, but we’ve been very surprised,” Keegan’s mother told Reuters.

His school’s administration has been generally supportive, but they made it clear that they don’t have any specific training or knowledge that can help in Keegan’s education.

Keegan, meanwhile, has chosen to carve out his own spot. When he and his classmates were asked what they wanted to be when they grow up, Keegan wrote “drag queen.”

That future doesn’t seem too far away: mentored by adult drag performers, Kween Keekee performed at the Austin International Drag Fest in 2018.

His parents, too, have largely “let Keegan be himself” when it comes to his gender identity. Five years ago – when Keegan was only four-years-old – Keegan began to wear dresses. He first went public in 2017 at the Austin International Drag Fest.

He recently came out as gay.

I did it! Today was my second drag performance but first time performing at an event as the only drag queen. I was SO nervous!!! @the.terrible.alik was supposed to do my makeup but got sick so my mom found @cherilake to do it. Well I was so nervous that I was scared to meet someone new so I made my mom do my makeup! She doesn’t really like makeup and I usually don’t let her do it, but it turned out ok today. Even though I was so anxious, I got out there and gave it my all. Thank you so much to @creativeaction for this big opportunity and thank you to everyone there who was so nice to me! I’m always worried that people will be mean to me when I’m in drag, so this was a big confidence boost for me! You can watch my performance from the link in my bio 🦄🦄🦄🦄🦄💗💗💗 #kweenkeekee . . . . . . . . #austin #kid #dragqueen #dragshow #austindragqueen #austindrag #babydragqueen #dragmakeup #dragkid #perfomer #dance #dancer #slay #werk #localqueen #brave #confident #lgbtyouth #lgbt #lgbtq #queer #queerkid #atx #austintx #creativeaction #communityartsunday #sunday #gratitude

Straight people are getting more uncomfortable with LGBTQ people each year