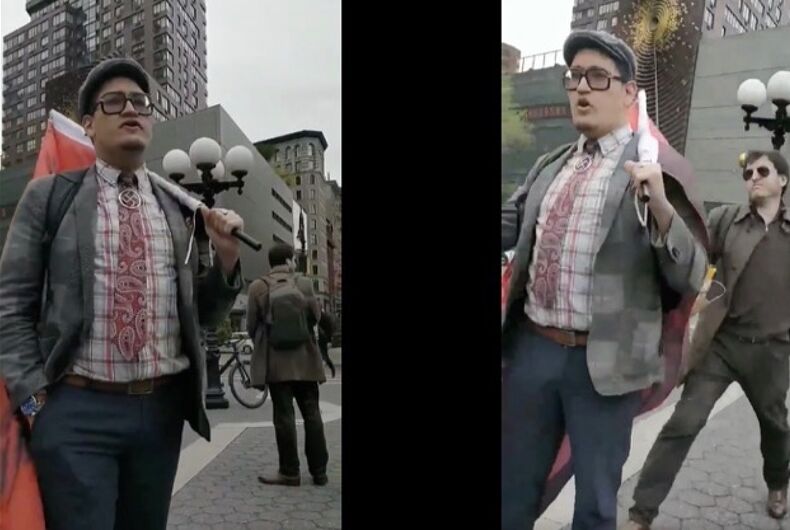 Jovanni Valle, a self-professed Nazi and Trump supporter, gets egged on the streets of ManhattanPhoto: Screenshot

Poor Jovanni Valle… What’s a Nazi to do when no one wants to hear his anti-Semitic and anti-LGBTQ hate speech and egg him instead? Why, run away, of course.

Valle was spewing his propaganda in New York’s Union Square while wearing a swastika necklace when an unidentified man threw three eggs at him, hitting him in the back of the head. He was telling his audience that homosexuality was due “to a chemical imbalance.”

“It’s hurting children, because children grow up mentally ill not knowing who they are,” he said.

Related: He was a Nazi for almost his entire life. Now he’s coming out as gay.

As stunned onlookers cheered, Valle tried to catch the man, but a bystander intervened and Valle ran away.

“There’s something about the sheer joy that can be seen as he runs off that is incredibly infectious,” told the Daily Mail. “Everyone should aspire to have that same level of happiness in their life as egg guy got from splattering the Nazi.”

Video of a Nazi getting EGGED bitch pic.twitter.com/Ddo5kRfVfo

Here's J*vi Val being egged by my bud n having his nazi flag snatched. Apols for amateur-hour face-blur, but our new egg boi's happy with it x pic.twitter.com/FCejwHJjDL

The Equality Act passed an important House committee. Every Republican voted against it.

Mayor Pete is going to hell whether he’s a top or bottom, Christian pundit says