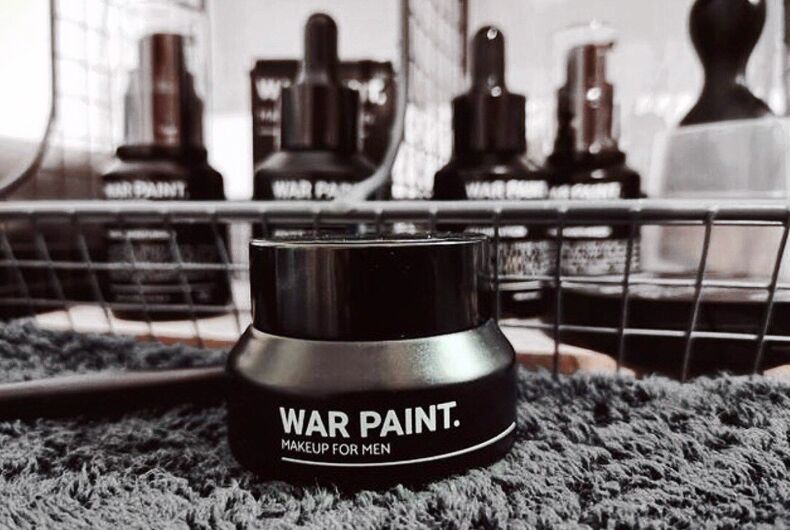 It has become increasingly common to see consumer goods marketed with a masculine edge as an attempt to cash in on a generation of men taught that they can never be manly enough, with a focus on making products that might otherwise be seen as feminine into their most macho forms.

Enter War Paint, a  line of makeup marketed to men. From the name to the all-black packaging, this line of foundation, bronzer, and other common makeup products are clearly aimed at a crowd who might use the product, but feel their masculinity might be threatened by wearing a dab of concealer.

The product claims to be designed for men from the start, focusing on the “tougher” skin of a man.

“The difference in men’s skin to woman’s skin is caused by hormones, specifically testosterone,” reads a notice on their website. “Androgens such as testosterone affect the thickness of the skin and how much sebum their skin’s sebaceous glands produce.”

They added, “Seeing as men have a whole shedload of testosterone, their skin is both thicker and oilier than women’s. This means that as a man you may be more likely to get spots and blackheads.”

Whether the product is a better fit for men or not, social media users at Twitter and elsewhere were more than willing to chime in on the product.

I…I just…makeup is for skin…you don't need to call it 'war paint' in order for 'men' to use it? Like do you have skin ok you can use Loreal.
Also…war paint, really? https://t.co/0R4i9Vk6Yo pic.twitter.com/ZHPpqj8Oov

"War paint" lmao , imagine being this weak , makeup is for everyone and men skin is the same as women skin jesus.
they really used a "manly" men for this shit i can't https://t.co/Lnp1utOrFZ

So someone decided to make a makeup company 'for men' bc of course the countless makeup brands that already exist would be embarrassingly feminine for men to use??
and it's called War Paint (for men duhhhhh) lmaoo pic.twitter.com/mlTUqKJsyX

No one asked for this. Any makeup brand, especially one with only about 500 followers on Twitter, would likely be thrilled to rack up 2.5 million views in a day on an ad for its product. But War … pic.twitter.com/zAOWRk1cJS

lmao y’all toxic masculinity THAT BAD you can’t wear some regular ass makeup (made for anyone bc men & women don’t have different skin lmfao) & had to make your own & call it war paint to make it sound “manlier”?? I hate y’all https://t.co/QD0DKozkSk

The founder of War Paint, Daniel Gray, claims it was body dysmorphia that drove his product line, saying that he could not find a makeup he felt comfortable purchasing.

“This is why I created the brand War Paint — something I’d feel confident in wearing. It’s not perfect yet, but I’m working on it. So look, for me this was never about making money, War Paint actually came from my own struggles. It’s about understanding that not all men have that confidence. I didn’t, and I struggled.”

Others complained about the range of colors available, and that many men with darker skin tones would be locked out of the product line. This is a common complaint in a lot of makeup, regardless of what gender they may be marketed towards.

And by the way, these are swatches of their concealer, tinted moisturizer, and foundation.
That shit looks patchy and dry as fuck. And of course their shade range is awful. There literally isn't even a real shade range for the concealer. pic.twitter.com/Gbw1sdSRsT

This is only “shade” colored folks are gettting pic.twitter.com/Iig0QcgmRL

Unfortunately, the product launch video no longer exists on Twitter, having been removed for a copyright claim over the music used within.