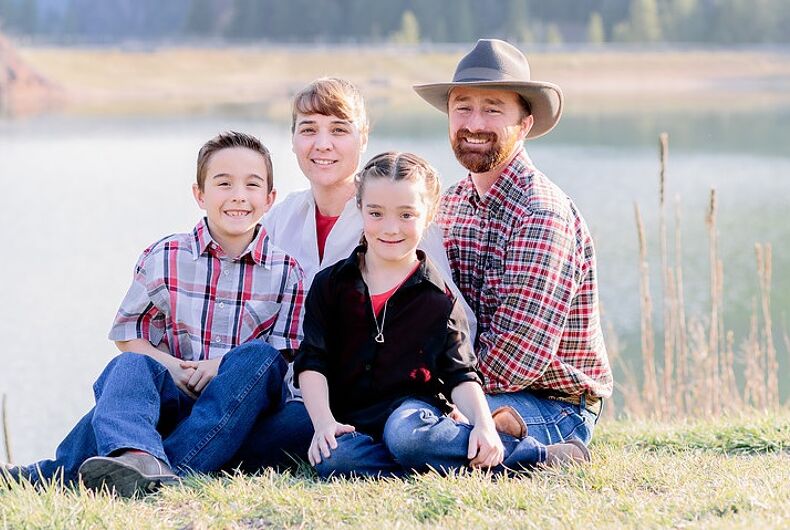 A county commissioner in Utah came out as gay in a video for his constituents.

Nathan Ivie (R) is a commissioner in Utah County, just south of Salt Lake City. He’s married to a woman and has two kids, and yesterday he posted a video to Facebook announcing that he’s gay.

“There’s no easy way to say this, I might as well just jump up and say it — I’m gay,” he said in the video. “That’s my reality and that’s what I need to talk to you about today.”

He said that he knew he was “different” since he was about nine-years-old, but he tried to fit in. When he was 22 he attempted suicide.

“Now I recovered from that near-tragedy and tried to live the life that was expected of me,” Ivie said. “The truth is, I never felt comfortable in my own skin. I felt I was living someone else’s life.”

Related: Congrats to the brides! Salt Lake City’s out mayor marries her partner

“I finally realized I spent most of my life feeling like the horse that was born defective, broken and destined for the kill pen,” he said, but then he realized that he’s worth more than that.

Ivie said that he and his wife decided to end their marriage and will be a “different kind of family” for their kids.

“I know there are haters in every area of my life, but we cannot let that be what defines us as a community,” he added, saying that he will remain county commissioner.

He did not comment about his party affiliation in the video.

Posted by Nathan Ivie Utah County Commissioner on Wednesday, May 22, 2019

Last year’s July 4 Freedom Festival in Provo, Utah, tried to ban LGBTQ organizations from its parade even though it was receiving government funding and had an anti-discrimination statement.

Ivie, at the time, stood up for the LGBTQ groups.

“After we went through the effort of incorporating the nondiscrimination clause, to be quite blunt, I didn’t think somebody would be stupid enough to do what they did,” he said. “The reality is, you guys belong in this community. You are part of this. We love you.”

He told Deseret News that he got involved with an LGBTQ group after that, which led him to coming out.

“Having to look in the eyes of mothers and fathers who had lost children to suicide and know that could have been your mom and dad going through that grief and pain,” he said.

“I had to really look at myself and say, ‘What am I doing to help people?’ If sharing my story does that, then I’m willing to take some of the stones from those who live in glass houses because I know in the end it will help someone who is struggling.”

He has received support from his colleagues since coming out.

“All the best to you @IvieNathan! I [heart] how a simple act of love among strangers helped you find your truth & that you are being embraced by family and friends,” tweeted Salt Lake City Mayor Jackie Biskupski (D), who is gay herself.

All the best to you @IvieNathan! I ❤️ how a simple act of love among strangers helped you find your truth & that you are being embraced by family and friends! https://t.co/OuRPezaP2l

“My instinct is just to embrace @IvieNathan. Today I stand with him as a friend, valued colleague, and fellow Republican,” tweeted fellow Utah County Commissioner Tanner Ainge (R).

My instinct is just to embrace @IvieNathan. Today I stand with him as a friend, valued colleague, and fellow Republican.

His story will provide strength and hope to those feeling the lonely despair that almost took his life and has taken too many in our community #HeartOfUtah https://t.co/sm7Iv9TI3G

Ivie’s term ends next year. When asked if he’ll seek reelection, he said, “We’ll see what that looks like when the time comes.”

The Trump administration is putting LGBTQ immigrants in solitary confinement