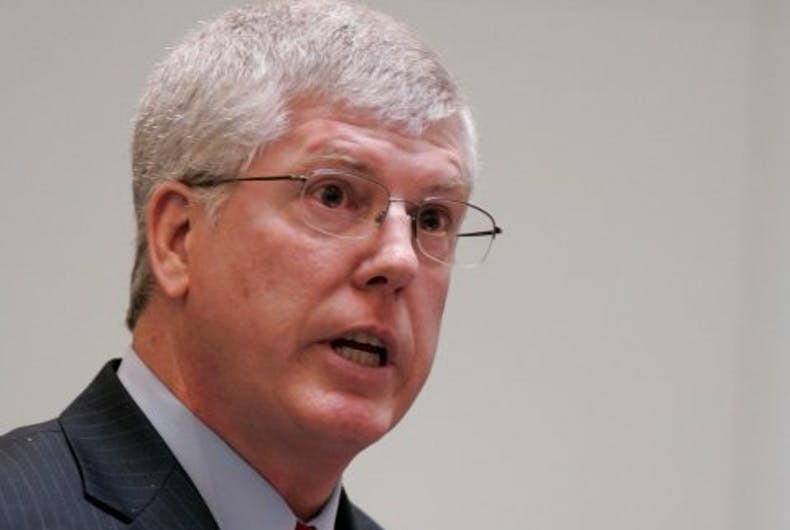 A conservative legal organization is accusing the State Department of promoting “the LGBT agenda.”

But their definition of religious freedom has little to do with religion itself, and more to do with controlling women’s bodies and discriminating against LGBTQ people.

The SPLC designated hate group’s leader, Mat Staver, sent out an email warning people that Secretary of State Mike Pompeo could issue a statement in support of LGBTQ rights.

Sec. Pompeo plans to increase his department’s promotion of LGBT goals this month. A memo is being drafted for Sec. Pompeo to push all U.S. embassies to lobby for new privileges for LGBT activists.

Sec. Pompeo has already threatened any country hesitating to accept his LGBT agenda with facing visa restrictions, a withdrawal of foreign aid, and even economic sanctions. I need your help to stop this immediate threat to religious freedom worldwide.[…]

His words opposed any country that allow “acts of discrimination” in employment and housing against those identifying as LGBT. He allowed no exceptions for religious people, organizations, schools or churches.

The email asks for money and for people to sign a petition to “stop Pompeo from forcing U.S. ambassadors to become tools for the LGBT agenda.”

Rightwing Watch speculates that Liberty Counsel may be worried that Pompeo will issue a statement for the International Day Against Homophobia, Transphobia and Biphobia (IDAHOBIT), which he did at around this time last year.

The State Department last year released a statement denouncing countries that “continue to arrest and abuse their citizens simply for being lesbian, gay, bisexual, transgender or intersex (LGBTI).”

“Human rights are universal, and LGBTI people are entitled to the same respect, freedoms, and protections as everyone else,” the statement read.

It’s hard to see why there needs to be a religious exemption for churches there. Is there a legitimate “religious freedom” argument when it comes to arresting and abusing people for being queer and trans?

Liberty Counsel has been fighting against the Equality Act, saying that the bill to ban discrimination against LGBTQ people would force churches to “promote the radical LGBT agenda,” Staver said on a radio program this week, even though it doesn’t apply to churches.

He talked about how a State Department memo on IDAHOBIT would “advance many of the ideals of [the Equality Act] all throughout the world.”

“I’m going to Israel at the end of the month,” he said on the radio program. “I don’t want to see a rainbow flag flying over Israel.”

Israel has its own LGBTQ population and pride celebrations, and whether or not they celebrate with rainbows has little to do with “religious freedom” in the US.

Update: An earlier version of this story attributed the Masterpiece Cakeshop case to Liberty Counsel. A separate group, Alliance Defending Freedom, is working on that case, not Liberty Counsel. We apologize for the error.

Make this the year you fall in love with your career