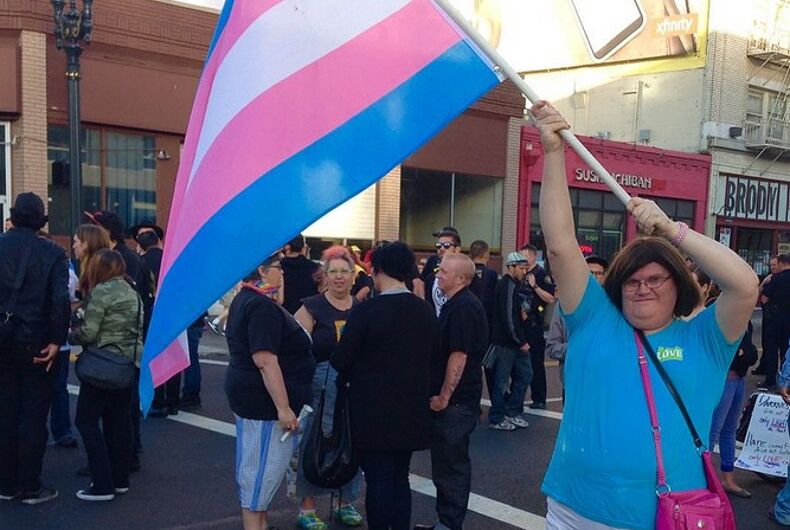 A demonstrator waves a transgender pride flag at a vigil in Portland Oregon mourning the victims of the terrorist attack in the Pulse nightclub in Orlando. Photo: sarahmirk/via Wikimedia Commons

The Iowa legislature is considering a bill that could overturn a court victory for transgender rights.

In March, the Iowa supreme court ruled that the state’s Medicaid program had to pay for gender-affirming health care.

But a bill that passed just before the legislature’s sessions ended would allow any state agency – including Medicaid – to refuse to cover gender-affirming health care.

Passed as an amendment to a health budget bill, the legislation says that any local government or agency can refuse to cover “sex reassignment surgery” or “any other cosmetic reconstructive or plastic surgery procedure related to transsexualism, hermaphroditism, gender identity disorder, or body dysmorphic disorder.”

Both the state house and the state senate have approved the bill, but Governor Kim Reynolds (R) has not yet signed it. She could use a line-item veto to remove the provision, but she has not commented on it.

In the court case, the Iowa Department of Human Services, which is responsible for administering Medicaid, argued that transgender care is cosmetic. The court disagreed, citing medical research showing that gender-affirming care is therapeutic.

Transgender people, though, may have to sue the state again to get coverage.

“This particular section just picks out one class of citizens to deny access to service for and I believe that violates the equal protection clause of the Iowa Constitution,” Sharon Malheiro, a lawyer who filed a brief in the previous court case, told the Des Moines Register.