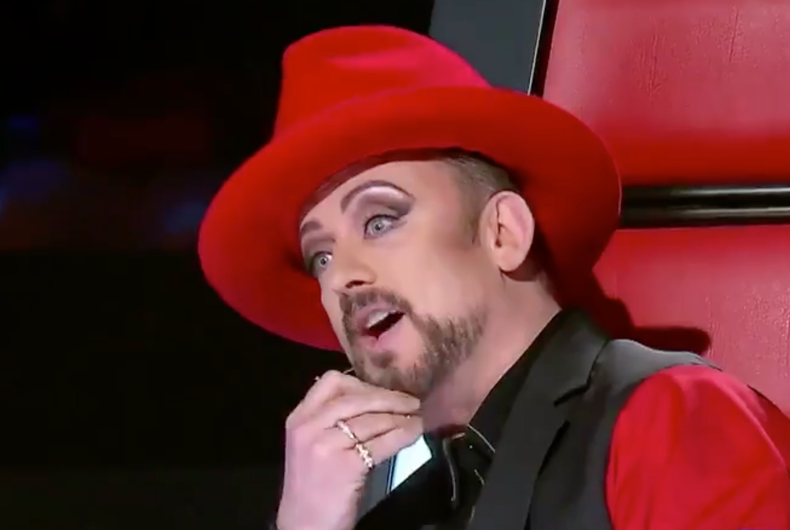 Boy George on The Voice, Australia Photo: The Voice

1980s pop star and gay icon Boy George stormed off the set of “The Voice Australia.”

During the show’s blind auditions this week, contestant Daniel Shaw performed Beneath Your Beautiful by Labrinth, accompanied by piano.

The auditions are when judges listen to the contestants perform without seeing them. They turn their chair around if they’re willing to mentor the contestant during the show and then the performer chooses among the judges who are interested if more than one turn around. All of the judges showed interest in Shaw.

During questioning after the performance, things got heated. George asked Shaw if he happened to play guitar.

“I can play guitar but no one really cares if I play guitar,” Shaw replied.

A visibility irritated George continued, saying, “I think after that comment, go with Delta,” before storming off the stage.

Delta Goodrem is another of the coaches.

George may have been annoyed after none of the contestants sought to be mentored by the celebrity, known primarily for his hits with Culture Club in the 1980s.

In spite of many highly publicized struggles with drug abuse and the law, including an assault conviction in 2008, George has turned himself around over the years.

He has identified himself as either bisexual or gay over the years, and often sports a somewhat androgynous appearance.

A chagrined George has responded to his outburst, saying that it was a misunderstanding on his part, and that he was having “a bit of a diva moment.”

“I’m back and I’m ready to fight now, I’m going to have fun,” he told the show’s Executive Producer, Leigh Aramberri, on the show. “Passion, it just takes you to somewhere. Sometimes you care too much but I don’t think that’s a bad thing. I think that it’s a good thing.”

After a full day with no Artists, @BoyGeorge has had enough. Where'd you go George? #WheresGeorge 🎩❓#TheVoiceAU pic.twitter.com/1KyzamkS44