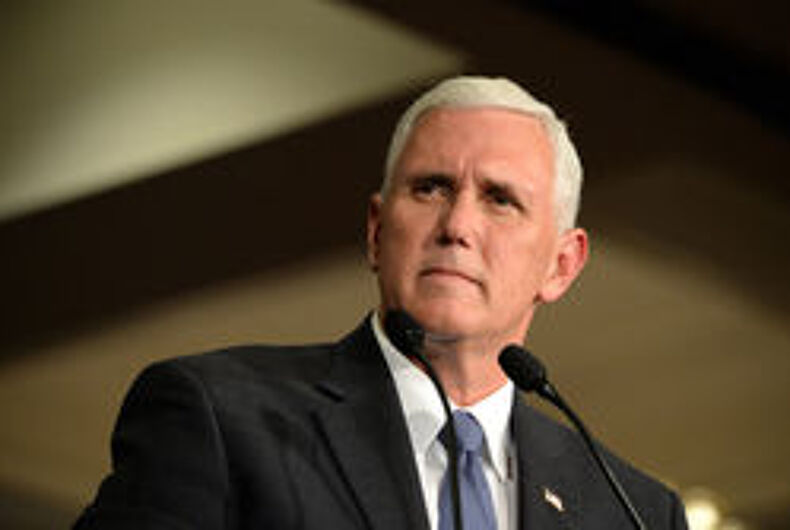 Today, dozens of graduates and faculty members of Taylor University — a Christian liberal arts school in Upland, Indiana — walked out of the graduation ceremony moments before Vice President Mike Pence was to deliver the commencement address.

Pence’s scheduled address stirred controversy at the 2,500-student school earlier this month when more than 12,750 people — “many of them students, alumni and parents,” according to the Indy Star — signed change.org petitions opposing his presence. The faculty also voted 61-to-49 to dissent against his presence when the school first announced his being the commencement speaker on April 11.

During that announcement, Taylor University President Paul Lowell Haines wrote, “Mr. Pence has been a good friend to the University over many years, and is a Christian brother whose life and values have exemplified what we strive to instill in our graduates.”

However, students and faculty both criticized the school leadership for choosing Pence without any student or faculty input and said that Pence doesn’t demonstrate the university’s Christian values.

Related: Mike Pence whines that America has ‘little tolerance’ for Christians if he can’t be antigay

Another student started a counter-petition with over 6,000 singers pledging support for Pence to speak.

Despite the protest, a majority of students remained seated and even gave Pence a standing ovation when he appeared onstage, according to media reports.

Pence has been criticized for being non-Christian in the past. Most recently, Pete Buttigieg asked whether Pence stopped believing in a Christianity when he started believing in Trump. He also blasted Pence’s support for so-called “religious rights freedom amendments” that allow anti-LGBTQ discrimination under the guise of sincerely held religious beliefs.

Next week, Pence will speak to U.S. Army cadets at the commencement of West Point Military Academy.

Taylor University Graduate Jennifer Nelson said, “I knew it was going to be rough because he’s such a large political figure and this administration’s made some very unpopular and sometimes like harmful decision for people. We have students from all over the world and like even students who have been impacted by some of this administration — not just the presidency but by Pence when he was governor here.”

92% of the U.S. still allows attackers to use to gay- & trans-panic defenses

Every Democrat wants to be president. More of them should want to be Senators.