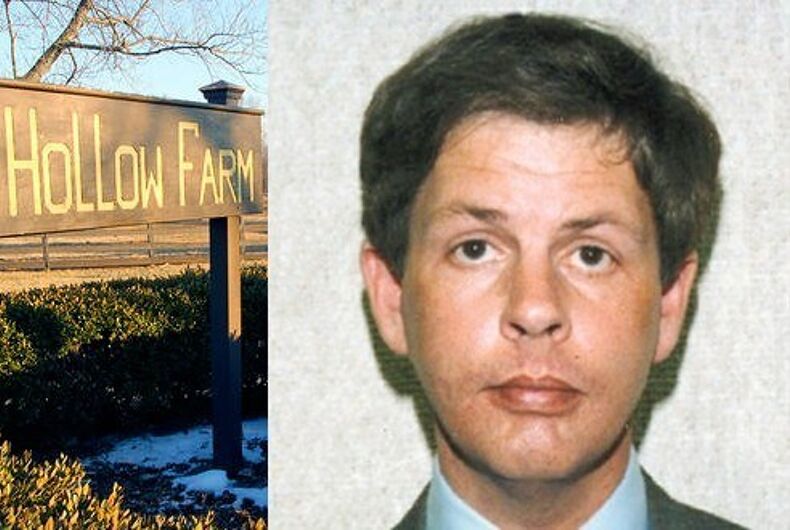 Herb Baumeister was accused of murdering at least 25 young gay men and leaving their bodies scattered across Indiana and Ohio in the late 80s.Photo: Composit

Part of the property where an infamous bisexual serial killer buried the bones of his victims is coming up for sale in the Indianapolis area. The crime is one of the most notorious in the state.

Herb Baumeister, a married man with three children, strangled at least 25 men he met in gay bars and buried some of their bodies in the woods near his home, Fox Hollow Farm. The bodies of other victims, some of them teens, were found partially nude in shallow streams across Indiana and Ohio.

The killer was diagnosed with schizophrenia as a teen and was known for his bizarre behavior. His wife says while the two were married for 25 years, they only had sex six times.

In 1992, police were contacted by a man who claimed that a man who called himself “Brian Smart” had picked up a friend of his at a local bar and killed him. He said the man also tried to strangle him with a hose when they had sex. Three years later, he saw Baumeister again and gave the police his license plate.

When authorities approached Baumeister and asked to search his property, both he and his wife forbid access to the land. A year later, however, frightened by her husband’s erratic mood swings and increasingly violent behavior, she filed for divorce and gave the police permission to search the property.

Baumeister fled to Canada after authorities started exhuming bones from his property. He shot and killed himself a week after he was named as the prime suspect. In his suicide note, he blamed the upcoming divorce for his decision to end his own life; he did not confess to killing the victims.

The home and 10 acres of the estate were purchased in the early 2000s for almost a million dollars. The other eight acres were purchased by Noah Herron. Herron wants to divide the property into four lots and sell three of them. He plans to build a home on the remaining lot.

Herron’s plans for the gruesome site was sent to a local commission for study after the Westfield city council agreed it could move forward.

Baumeister’s former home has had multiple owners since his death and many of them claimed it was haunted. It is a popular site for ghost hunters and the morbidly curious.

“I wanted to make a joke at the council meeting and say that we hope we don’t find any bones while we’re building, but I decided to keep it professional,” Herron told the Indianapolis Star after the council meeting. “Everyone in the area is familiar with what happened there, but still, people love the grounds and are interested in buying.”

“We asked neighbors around there if they’ve ever seen ghosts, and they said no. So we’re good.”