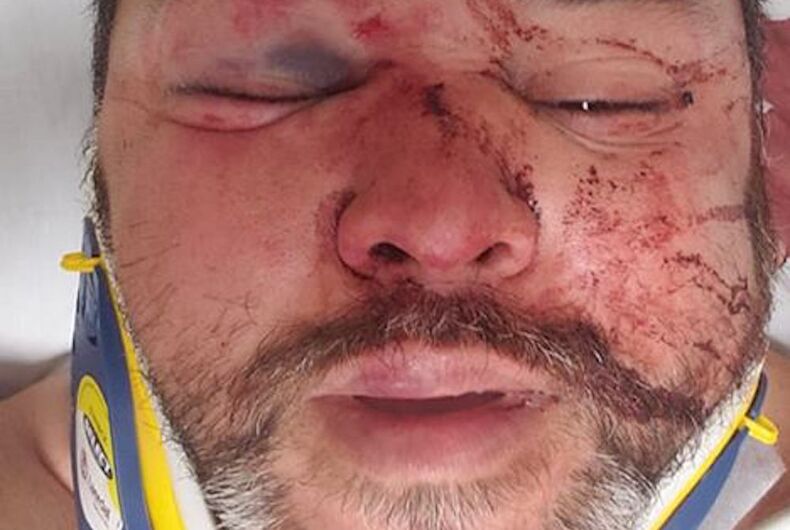 Phoenix police have released video footage (below) showing four suspects wanted in connection to the March 16 assault of a local gay man named Cesar Marin. The suspects are described as “a tall black female with long braided hair, a white female with light colored shoulder length hair, and two men with beards,” according to FOX 10 Phoenix.

Marin says the attack started when a woman jaywalking across the street stared him down in his convertible while he was playing music loudly. When he told her to proceed, she took a long drag off of her cigarette and then allegedly flicked the lit cigarette directly at his face and called him a “f*ggot.”

He adds she likely called him an antigay slur after hearing him blast “flamboyantly gay music” like Madonna, Cher or The Weather Girls’ “It’s Raining Men” from his car stereo.

“I freaked out and said something like why did you do that, what’s wrong with you. I did a u-turn ’cause of how close to the intersection I was. I pulled over fast. I didn’t want my car to catch fire as I saw red hot embers when she hit me with it. I got out of my car to get to the passenger side to look for the cigarette when the attack started…. Before I knew it, I was surrounded in a hail of punches. One guy kicked me in the face when I fell down.”

Marin reportedly had his nose broken in two places from being kicked in the face. Despite his bruising, black eyes and pain, Marin has since made a full recovery.

Police had already arrested the alleged cigarette flicker, but the other suspects are wanted on aggravated assault charges. Police haven’t yet said whether the suspects might be charged with a hate crime.

Anyone with information can give police an anonymous tip at the Silent Witness hotline at 480-WITNESS. Spanish speakers can do the same at the Testigo Silencioso hotline at 480-TESTIGO.

Marin told the media, “What they did was wrong, and frankly, I don’t know how anybody can live with themselves, knowing they hurt another human being like this.”