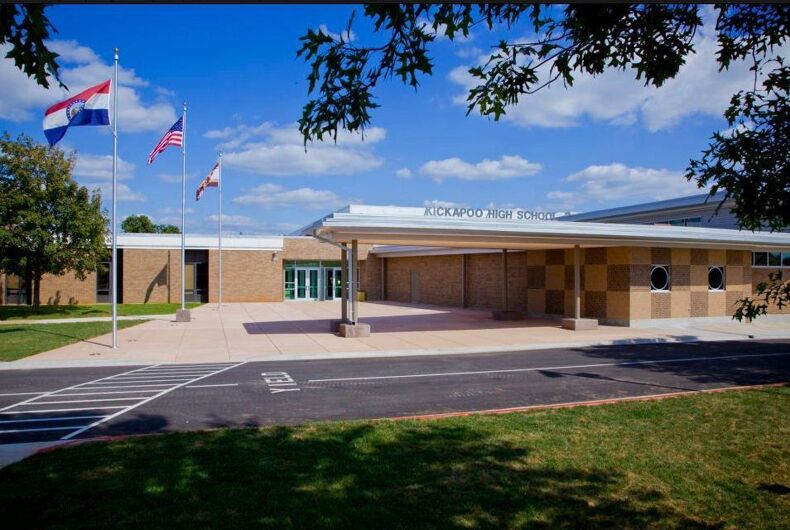 Recently, during lunchtime at the Kickapoo High School in Springfield, Missouri, an unnamed student ascended a balcony overlooking a commons area and tore down a large hanging sign advertising the school’s Gay Straight Trans Alliance (GSTA). The vandal crumpled up the sign into a ball and dropped it into the crowd below. Dozens of students laughed and clapped, according to the Springfield News Leader.

The incident was caught on camera, posted to social media, subsequently removed, and the student was apprehended and punished according to the student handbook. Possible punishments include a student-administrator conference and temporary suspension.

Principal Bill Powers called the incident “incredibly disrespectful,” stating it made both students and teachers feel uncomfortable. He added, “Disrespect of any student in our school will not be tolerated.” Powers later visited with students of the GSTA to discuss how the school can foster more empathy and understanding.

My students were very upset … In that moment, they didn’t feel safe at school. They felt like they didn’t have a place here. The cheering that happened is what really bothered them. They said it would be one thing if somebody was just ignorant and tore down their poster, but it was such a public display and the person put on such a show, to much cheering, and that was really heartbreaking to them.”

Later that week, another student tore down another GSTA poster at the exact same location and was disciplined in a similar manner as the first student.

Related: Christian parents sue for “religious freedom right” to know if their kid joins a GSA

Powers e-mailed parents during the weekend, stating, “As parents, I ask that you help reinforce this message with our students. Please remind your children to be civil, kind and respectful to everyone. Also, reassure them that Kickapoo is a safe school where adults care about them and are here to support them.”

This last Friday was the National Day of Silence, “a student-led national event where folks take a vow of silence to highlight the silencing and erasure of LGBTQ people at school,” according to the Gay and Lesbian Student Education Network (GLSEN).

It takes 4 hands to open this ‘consent condom,’ but does that really equal consent?