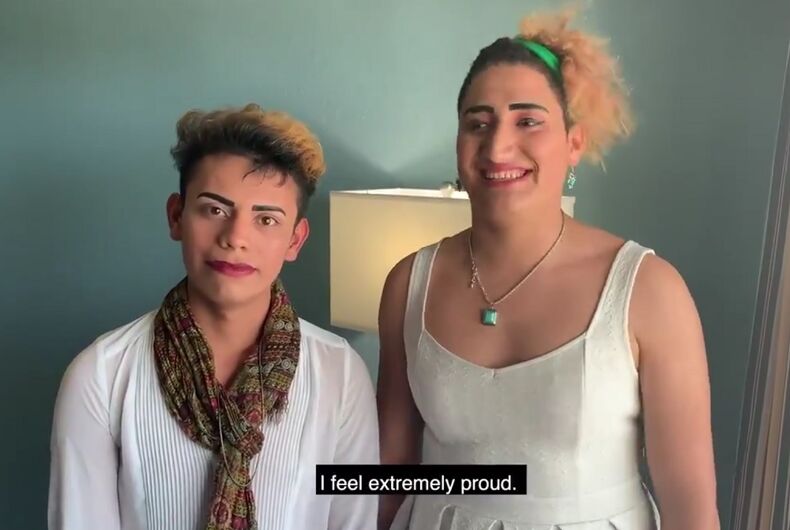 Estrellita and Cataleya were helped by Raices at the border.Photo: Raices/Twitter

An organization shared an inspiring story of going to Mexico City and helping LGBTQ asylum seekers get to the U.S.

RAICES, a Texas nonprofit that provides legal services related to immigration, posted the story on Twitter about how they sent a team to Mexico City to help travelers coming to the U.S. this past November.

So when we heard Trump’s hate, we also read powerful stories from @paolamendoza and saw incredible photos from @KishaBari and decided we, too, would travel down to Mexico city to meet these asylum seekers and see how we could help.https://t.co/361ZJ6Ohyj

Bear in mind, we’d never done this before -gone across the border to see if we could support asylum seekers. A small team went to Mexico city in Nov where we met 7,000 exhausted travelers cooped up in a stadium. Families were sleeping in the open air. They’d been walking for wks.

When they got there, they met a group of over 100 LGBTQ emigrants who were particularly in danger, like Crystal, who left Honduras because of transphobic violence.

Crystal also faced intense transphobia in Honduras. She was attacked by gang members & moved to another part of the country.

But it was the same there. The final straw came when people tried to set her on fire. She fled.

“I want asylum, & I trust in God that’ll happen.” pic.twitter.com/VsY7fIzdkF

Raices bought them bus tickets to Tijuana to speed up their journey. Some of them had been walking for weeks.

When we got to Tijuana we rented rooms for them so they could have a safe place to stay while they waited. We cooked food with them. After fleeing violence and weeks of walking, they were exhausted.

They helped the asylum seekers navigate the system, which now requires them to stay in Mexico until a judge can rule on their cases.

Angner from Guatemala wants to come to the U.S. because he’s afraid he’ll be killed for being gay.

Trumps "Return To Mexico" policy will force LGBTQ asylum seekers like Angner to stay in Mexico indefinitely while their immigration cases go through the courts.

Don't let our govt turn its back on vulnerable people.

We need you to call your elected officials today. pic.twitter.com/tR5BeVrSN8

Raices also looked for sponsors for the asylum seekers.

Meanwhile, we tried to help secure sponsors who could provide housing to members of La Comunidad after there were released. https://t.co/ucHmYrVQ1r]

It was a long wait.

They were detained for almost 5 months.

And people are getting asylum.

TODAY we have good news: 4 of them got asylum on Monday and were released yesterday!!

That’s a total of 9 so far. We still can’t believe it. We work in a field where we don’t normally get to celebrate. We end up crying more than we laugh. We don’t do it expecting to win.

That's for another today. For today, please take a moment within the #MuellerReport madness and listen to Estrellita and Cataleya who are so goddam happy to be free: “I feel so happy because I know I’m heading to my new life.” pic.twitter.com/JyIdme2HGr

Raices ended their story by asking for financial support.

We are thrilled for today's successes, but know that our work won’t be done until nobody who has fled to save their life must then fight for it again here, in jail and alone.

If you can, please help us to keep fighting: https://t.co/VsfPAJfp3r

Anti-LGBTQ right-wingers are gloating over the Mueller report, but probably not for long