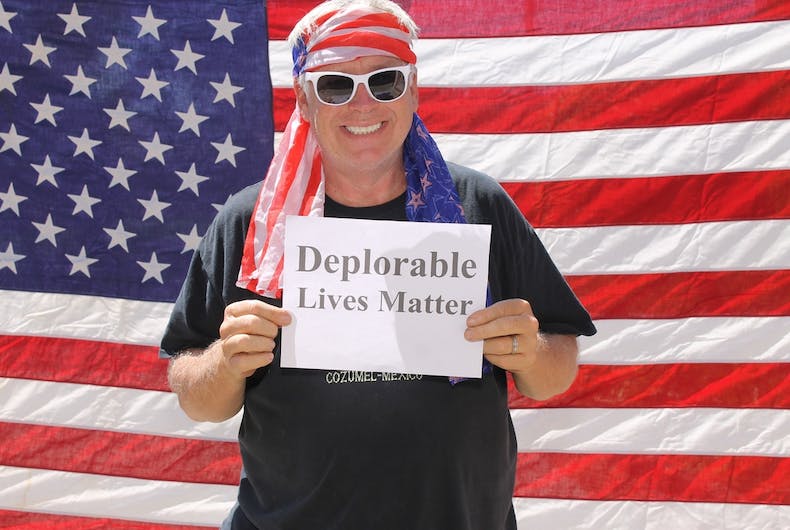 This is a photo illustration of a Trump supporter. This is NOT an image of John Kless, the man arrested for making death threats.Photo: Shutterstock

A 49-year-old named John Kless was recently arrested and charged with making threatening communications after he allegedly called the offices of U.S. Senator Cory Booker and U.S. Representatives Rashida Tlaib and Eric Swalwell and made homophobic death threats.

According to The Miami Herald, Kless made the calls last Tuesday morning from his own phone and was arrested and made to face a judge on Friday. “He was released on bond with a GPS monitor and a requirement that he stay away from guns and the people he threatened,” the newspaper reports. He was also given a mandatory curfew.

Kless allegedly called Swalwell’s office and warned that “taking guns from Americans would be his ‘death bed.'” He reportedly said, “The day you come after our guns, m*therf*cker, is the day you’ll be dead.” Swalwell is a Democratic presidential candidate advocating firearm reform.

Although he is white, Kless reportedly called him the n-word.

And it gets worse:

A readout of the message Kless allegedly left for Booker, a black senator from New Jersey, included racial slurs and a defense of the white supremacist found guilty of murder after he drove his car into a crowd of protesters in Charlottesville in 2017. In his message to Tlaib, police say Kless referred to the Muslim congresswoman from Michigan as a member of the Taliban [and “a towel-head”].

CBS News reports that when he called Booker’s officer, he repeatedly called Booker “the ‘n-word’ and a ‘monkey,'” adding, “We’re going to have a war in this country m*therf*ckers” and “you’re going to be the m*therf*ckers who pay…. Don’t you worry, you government officials will be in the graves.”

In his threats, Kless also invoked Trump, stating, “This ain’t Trump’s fault … it’s all your people’s fault. You definitely don’t tell our president, Donald Trump, what to say.” He also repeatedly mentioned U.S. Representative Ilhan Omar, a Muslim woman who has received an increasing number of death threats after her comments on 9/11 were reposted out of context by Trump and his other supporters.

It’s unclear what homophobic comments Kless made against the officials. Many of his threats were left on voicemails. He faces five years in prison if convicted.