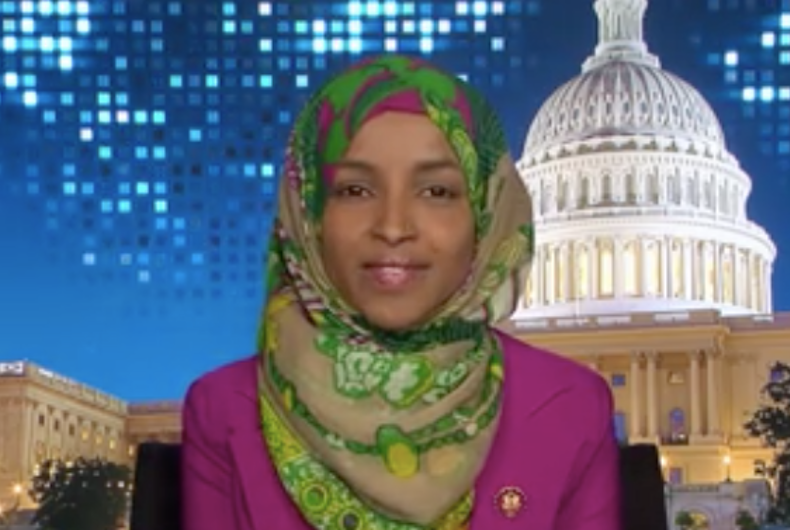 On the day in question when Donald Trump and his Fox News sycophants attacked Representative Ilhan Omar’s words, taken out of context, her larger point was that since 9/11, Muslims and anyone even suspected as being a Muslim in the United States – which mistakenly includes Sikhs – have been targeted, scapegoated, harassed and oppressed for the actions of a total of 19 men of Saudi Arabian heritage.

To stereotype and scapegoat all followers of Islam for the events of 9/11, San Bernardino, and Orlando is as invalid as blaming all Christians for the despicable actions perpetrated by Timothy McVeigh, the Oklahoma City bomber who was involved in the so-called “Christian Identity” movement.

Yes, Representative Omar could have articulated her meaning better, but people tell me that I should articulate my words and meanings better virtually every day.

The difference, however, is that Trump and Fox have exchanged Nancy Pelosi with Ilhan Omar as the enemy, using fear and hatred as their weapon. And by so doing, they have placed all U.S. Muslims at greater risk of marginalization and violence – U.S. Muslims who comprise a proud and patriotic people who love and cherish the United States no more and no less than any other group.

Related: It’s time to call BS on Trump’s use of Jewish people as props in his political drama

This cynical Islamophobic, xenophobic and racist strategy is similar to Trump’s bashing of Latinx asylum seekers from our southern border who wish to escape tyranny for themselves and their families, Trump’s attacks on trans military personnel whose intention is to honorably serve their country, Trump’s disparaging of people of color demanding a more just judicial system, his hostility towards women who insist upon the freedom to control their own bodies and for equal pay, and his attempts to place a wedge between Jews and the Democratic Party…  and the marginalization continues.

Representative Omar was speaking truth to power by issuing a warning about the realities of Muslim U.S.-Americans.

Following the horrendous events of September 11, 2001, a national poll found that 50% of all U.S. residents believed that our government should place a ban on Muslims entering the country. The idea was proposed in 2016 by then presumptive Republican presidential candidate Donald Trump and was then virtually instituted with his ascendency to the Oval Office.

In 2006, the Council on American-Islamic Relations (CAIR) released its report finding that approximately 25% of U.S.-Americans considered Islam a religion of hatred and violence. Those most biased tended to be older, less educated, politically conservative and more often supportive of the Republican Party.

Though a 1963 U.S. Supreme Court case ruled unconstitutional any mandatory prayers or Bible readings at public schools or the promotion of religion, subsequent rulings declared the constitutionality of many forms of personal religious expression on school campuses.

A physical education teacher in Iowa, however, forbade a Muslim elementary school student from wearing a traditional Muslim full-body swimming garment during instruction in the school pool. The teacher ordered her, instead, to wear a western-style bathing suit, which would force the student to act against her faith.

Her student’s mother was compelled to educate the principal on Muslim religious practices. After much discussion, the principal agreed to permit the student to wear a swimming garment of her choice, though he warned the girl’s parent that the child would most likely incur anger and mocking epithets from her classmates, which he’d be unable to control.

Muslim students, faculty and staff, however, are routinely not accorded the opportunity to have a safe prayer space on campus to perform the salat (prayer), as required by the Five Pillars of Islam.

A case in point involved a 17-year-old high school junior in Ohio, who was barred by school administrators from praying in an empty classroom at lunch and before and after class hours. In this case, CAIR stepped in on the student’s behalf, and convinced the school district to reverse its policy.

Since September 11, 2001, we’ve seen growing numbers of violent acts directed against Muslims and incidents including “unreasonable arrests, detentions, and searches/seizures.”

For example,CAIR’s 2005 report (entitled, “Civil Rights Report: Unequal Protection) included mention of an incident in which a Muslim woman wearing a hijab, the garment many Muslim women wear in public, took her baby for a walk in a stroller, when a man driving a truck nearly ran them over. The woman cried out that, “You almost killed my baby!,” and the man responded, “It wouldn’t have been a big loss.”

In addition, governmental agencies such as the IRS and FBI continue to enter individuals’ private homes and mosques and make unreasonable arrests and detentions.

Individuals have targeted Sikhs and Hindus as well. Between 2002 and 2005, the Sikh Coalition organization listed 62 hate crimes directed against Sikh U.S. citizens.

National attention briefly focused on the severe beating of Rajinder Singh Shalsa in New York City, and the fatal shooting of Sikh gas station owner Balbir Singh Sodhi in Mesa, Arizona. It’s widely assumed that Sikhs are targeted because they wear turbans, which the public imagination equates with Muslims and thus “terrorism.”

CAIR’s 2015 report, “Islamophobia and Its Impact in the United States”, the organized summarized a number of research findings, including the following:

According to key findings in CAIR’s 2018 research report (emphasis added):

Of particular alarm is the fact that federal government agencies instigated 35 percent of all anti-Muslim bias incidents recorded in 2017. This represents an almost unprecedented level of government hostility toward a religious minority within the United States, and is counter to the American value of religious freedom” (emphasis added).

Islamophobic xenophobia routinely surfaced throughout the 2008 and 2012 presidential elections. Members of the political right challenged and spread rumors regarding Barack Obama’s cultural, social and religious background, political philosophies, U.S. birth status and patriotism. Insinuations flew about his supposed Islamic background connected to his alleged Marxist and Fascist political influences (even though true Marxism and fascism are ideologically contradictory of one another).

Opponents referred to him as Barack Hussein Obama – emphasis on “Hussein” — in their attempts to connect him not only to the Muslim faith, but also to the former ruler of Iraq. In fact, his middle name is indeed “Hussein,” which in Arabic translates as “good” or “beautiful.”

Furthermore, since this country is founded on the notion of freedom of religion, the religious or non-religious background any candidate or any individual — no matter what it is — should in no way disqualify or call into question their credentials.

Islamophobia can be defined as prejudice and discrimination toward the religion of Islam and Muslims who follow its teachings and practices. Like racism and sexism, Islamophobia is much more than mere fear. It is a taught and often learned attitude and behavior, and, therefore, falls under the category of oppression.