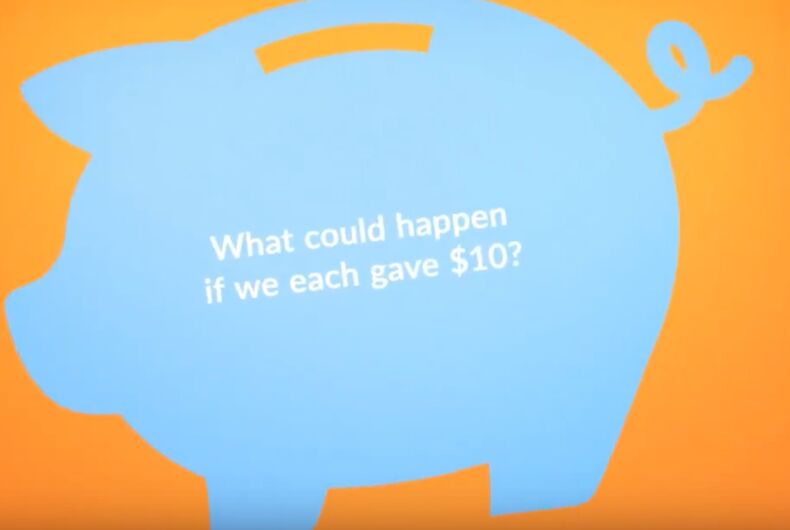 Today is the annual Give OUT Day, meant to spur donations to LGBTQ organizations working to advance civil rights. But with every group in existence emailing you to beg for cash, the possibilities can get overwhelming.

So we’re making it easier for you. Since $50 seems to be the average donation amount on these sort of charity fundraising drives, throw $10 each to these five organizations to get the biggest bang for your buck.

All of these organizations are doing local work in their community to better the lives of LGBTQ people – and most of them run with remarkably little financial support, relying on volunteers to do the hard work.

The Tennessee Equality Project has been instrumental in fighting back against the state’s “slate of hate” – several anti-LGBTQ bills filed in the state legislature. Time and time again, they have helped defeat some of the most draconian and nasty attempts to harm the LGBTQ community. Throw them support here.

Related: Tennessee GOP is trying to ban marriage equality again to get it back in front of the Supreme Court

Freedom Oklahoma is one of the smallest state-level equality groups and they’re fighting back against some of the country’s most extreme religious right influence campaigns. Located in the heart of the Bible belt, they’ve even had shots fired into their office. Throw them support here.

Related: Someone shot up an LGBT advocacy group’s office in Oklahoma

As one of the most populous states – and politically influential – wins for LGBTQ people in Florida would be replicated across the nation. Equality Florida has made large strides in improving the lives of the community – and they’re facing a current battle to get statewide nondiscrimination protections passed through the legislature. Their office has also been vandalized. Throw them support here.

Based in Washington, DC, Casa Ruby is a powerhouse organization operating on a shoestring budget dedicated to improving the lives of transgender people, especially trans folk of color. Their offices have been vandalized, invaded by a masked man, and staff assaulted – and they’re still saving lives. Throw them support here.

Unlike the others who are fighting local battles directly, Equality Case Files is a little different. Started and run by a single woman, the group documents all the numerous court cases involving LGBTQ rights and explains what they mean in clear, concise language. The quick evaluation and in-depth knowledge of the issue has been instrumental in helping LGBTQ and mainstream media digest the information and informs other groups – like the four listed above – how the legal decisions will affect their work. Throw them support here.

This famous male model died of AIDS, but his family told the media he had a skiing accident