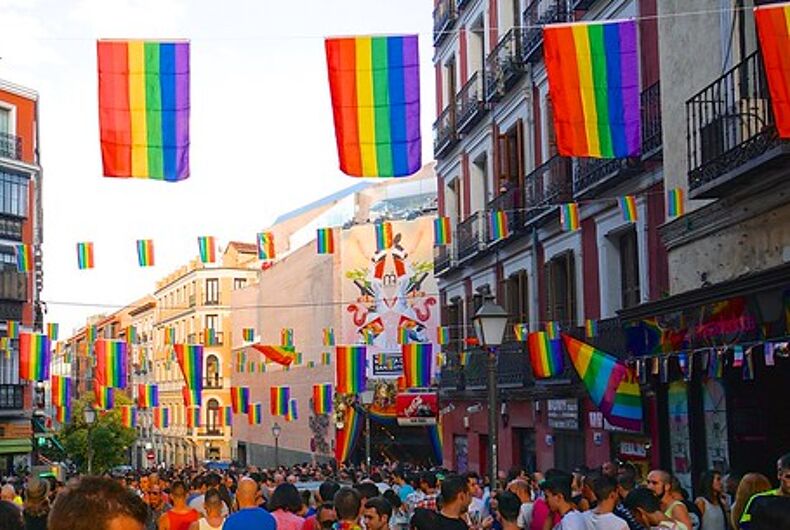 When the tide began to turn in favor of LGBTQ rights in the U.S., the religious right began to look for more fertile ground overseas. Because Europe was too much like the U.S., evangelical leaders turned to Russia and Africa to push their particular brand of hatred.

But the resurgence of the right — especially the far right — in developed nations has led the religious right to re-emerge in Europe. The World Congress of Families meeting held in Italy in late March was a kind of declaration that the hate group sees a window of opportunity in Europe.

A new analysis by openDemocracy, a global media platform, shows just how much the religious right is invested in Europe. The outlet reviewed hundreds of pages of financial filings for religious conservative groups in the U.S. and found that they have spent $50 million in Europe since 2008. If anything, openDemocracy says, that figure is “a likely underestimate” because the organizations rely upon “dark money” that can’t be traced.

The European activities that the U.S.-based groups are funding include challenging laws against discrimination and hate speech, supporting campaigns against LGBTQ rights in the Czech Republic and Romania, and lobbying EU officials in Brussels.

Two of the groups the analysis singles out are well-known in the U.S. for their anti-LGBTQ crusades: Alliance Defending Freedom (ADF) and the American Center for Law and Justice (ACLJ). Combined, the two organizations have spent more than $20 million in Europe since 2008.

ADF is the group behind the Masterpiece Cakeshop case, which could lead to religious exemptions within nondiscrimination laws. ADF also represented Kentucky clerk Kim Davis in her failed effort to stop marriage equality.

ADF tripled its spending in Europe between 2012 and 2016 and now has offices in Belgium, France, Austria, Switzerland and the UK.  ADF International co-hosted an event this year with a French group linked to the far-right party Front National. The group, La Manif Pour Tous, launched a ‘Europe for Family’ campaign in 2014 that asked  French candidates to sign a pledge opposing marriage equality, trans rights and sex education.

ACLJ was founded by televangelist Pat Robertson as a counter to the ACLU. As you’d expect from that origin, ACLJ has a long history of fighting LGBTQ progress.

Both groups has close ties to the Trump administration. ACLJ is run by Jay Sekulow, who has been doubling as President Trump’s personal attorney. Then-Attorney General Jeff Sessions gave a speech to ADF, although what he said was kept from the public.

The religious right’s investment in Europe closely parallels the rise of far right extremism and nationalism there. Still the amount of money being spent on the continent is a surprise to many there, who are not used to the kind of dark money that is commonplace in the U.S.

“It took the Christian right 30 years to get to where they are now in the White House,” Neil Datta, secretary of the European Parliamentary Forum on Population and Development, told openDemocracy. “We knew a similar effort was happening in Europe, but this should be a wake-up call that this is happening even faster and on a grander scale than many experts could have ever imagined.”

How will identity politics play in the 2020 presidential campaign?