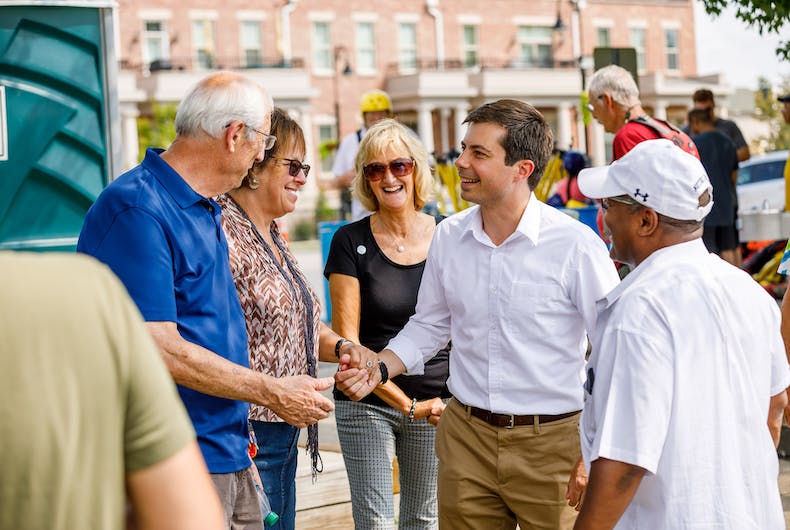 The religious right is upset that out presidential candidate Pete Buttigieg has taken the nation by storm. Evangelical leaders are claiming the small town Indiana mayor isn’t actually a Christian because he is gay.

They’re particularly perturbed he’s had the temerity to challenge holier-than-thou Vice President Pence’s conservative brand of evangelical Christianity and President Donald Trump’s lack of “Christian values” despite being embraced by the religious right.

“I’m reluctant to comment on another person’s faith, but I would say it is hard to look at this president’s actions and believe that they’re the actions of somebody who believes in God,” Buttigieg has also said.

“I just don’t understand how you can be as worshipful of your own self as he is and be prepared to humble yourself before God. I’ve never seen him humble himself before anyone. And the exaltation of yourself, especially a self that’s about wealth and power, could not be more at odds with at least my understanding of the teachings of the Christian faith.”

Michael Brown, writing for the American Family Association’s blog, took umbrage at Buttigieg’s dig at Trump’s decided lack of “Christian values” supposedly a bedrock of evangelical doctrine, saying it is “absurd” because the candidate “professes to be a serious Christian, yet is pro-abortion and ‘married’ to his same-sex partner.”

The American Family Association has been deemed an anti-LGBTQ hate group masquerading as a Christian charity.

“Buttigieg must discard the entire testimony of Scripture, since every single reference to homosexual practice in the Bible is condemnatory, without a single positive, homosexual-affirming statement of any kind,” Brown writes before claiming Buttigieg will not get into heaven when he dies.

“My issue is with a pro-abortion, practicing homosexual who claims to be Christian calling out Trump’s alleged ‘hypocrisy.’ That, indeed, is the height of hypocrisy, and there is nothing Christian about it.”

“I mean if Buttigieg thinks evangelicals should be supporting him instead of Trump, he fundamentally does not understand the roots of Christianity,” he sent to Twitter. “But then he is an Episcopalian, so he might not actually understand Christianity more than superficially.”

Erickson says that Buttigieg’s faith is “corrupt and flawed.”

“Buttigieg wants to reject the inconvenient parts of faith he does not like,” Erickson writes in an article for The Resurgent. He is a gay man who got married; he does not think homosexuality is a sin despite express statements in scripture, and he thinks abortion is a moral issue and we cannot legislate our morality.”

But in the end, Erickson takes one step back toward reality than Brown is willing to do.