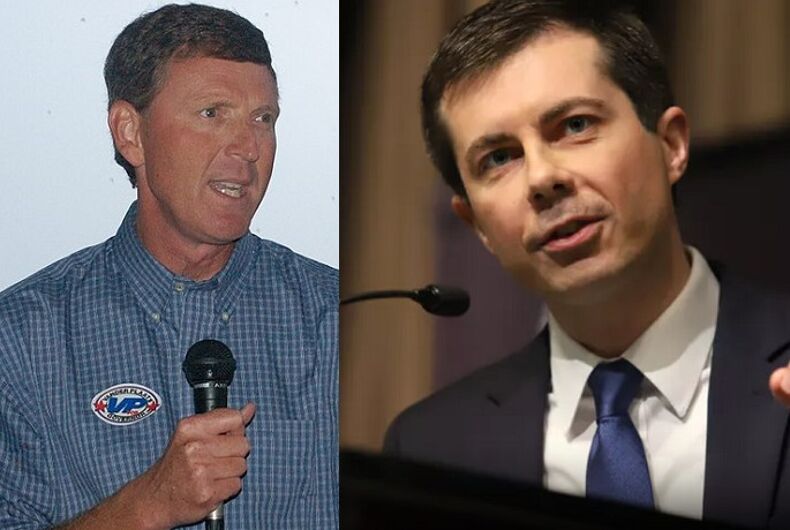 South Bend Mayor Pete Buttigieg might attend a presidential forum hosted by one of Iowa’s most famous homophobes.

This year, Vander Plaats said that the forum would be open to Democrats as well.

“A lot of them are using faith as kind of a focal point, as a centerpiece,” he told NPR. “So we’d like to find out what makes them tick.”

A spokesperson for the Buttigieg campaign said that he is considering attending.

Daniel Hoffman-Zinnel, the executive director of the LGBTQ organization One Iowa, said, “I would be a little surprised if any of them really took him up on this offer to engage in this conversation.”

“It potentially could show the audience of The Family Leader a visible, positive representation of an out gay man who’s running for the highest office in our land,” Hoffman-Zinnel said. “So maybe it could potentially change people’s hearts and minds — or at least get them to think more broadly.”

Graham posted on social media that Buttigieg can’t be both Christian and gay. “God’s Word defines homosexuality as sin, something to be repentant of, not something to be flaunted, praised, or politicized.”

Vander Plaats has been active in Iowa politics for two decades and has run failed campaigns in the 2002, 2006, and 2010 Republican gubernatorial primaries.

In 2010, he led a successful campaign to remove three judges from the state supreme court after they ruled in favor of marriage equality in 2009.

After he started running the Family Leadership Summit, he required candidates to sign his “Marriage Vow” in order to get his endorsement. The Marriage Vow said that homosexuality is a health risk and implied that slavery was good for African American people.

In 2011, ABC reported that multiple sources said that Vander Plaats was trying to sell his endorsement for $1 million.

This isn’t the first time Buttigieg has said he’s willing to appear in a far-right forum. Last week, Fox News announced that they will be hosting forums with both him and presidential hopeful Senator Amy Klobuchar (D-MN).

A white supremacist murdered a black trans woman. He just got life in prison.