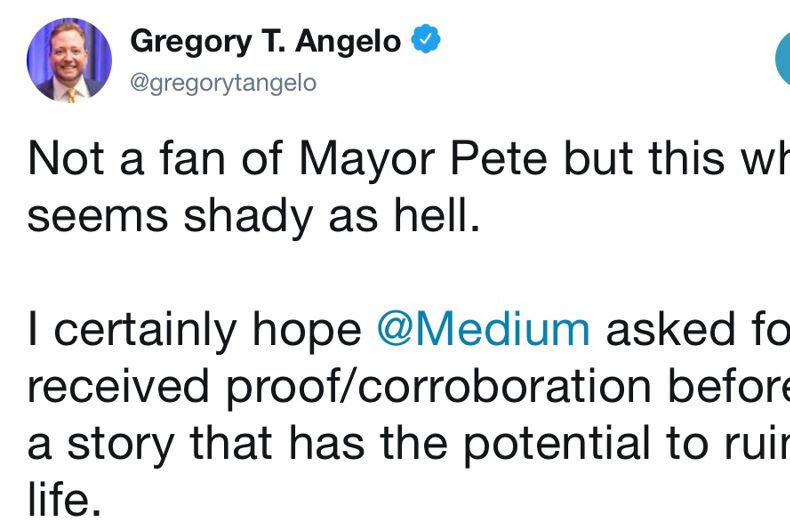 Out presidential candidate has been accused of sexual assault in a Medium post by a 21-year-old Michigan man, Hunter Kelly. The sparse posting doesn’t offer any details of the supposed assault and even Republicans are skeptical of the accusation.

“I was sexually assaulted by Mayor Pete Buttigieg. I didn’t know who he was back in February, only that he told me he was an important politician,” Kelly writes. “When I started seeing him on television three weeks ago as a Presidential candidate, I thought about coming forward.”

“I am a gay man. I have been grappling with my identity for a number of years. I live, work, and attend college in rural Michigan. I know that by coming forward, I will make a hard life even harder. But I must do so — I must do so — for my country, for other gay men like me, and most importantly to stop a very bad man from becoming President of the United States.”

He then teased that he would release details of the alleged assault at a later time.

Kelly, who has tried to scrub his social media profile, is reportedly a gay Trump supporter according to those who’ve been trying to find out more about him. Others are suggesting he isn’t real at all.

“He’s a Log Cabin Republican and a very vocal Trump supporter. He sure tried to erase as much as he could from the interwebs before posting his statement, but forgot a few things,” Mike Reynolds said. “He’s posted on several online threads in support of Trump. His facebook still has likes for Trump and a group called ‘USA Patriots for Trump’ And his instagram, until he made it private, had in it’s profile: “Hunter Kelly @hkelly1997 instagram profile. value yourself. Log cabin republican. LGBT for Trump. 2a. Patriotic. #MAGA #Trump2020.”

“I’m a sexual assault survivor and victims need to be heard. But it is wrong to falsely accuse someone by name,” he told LGBTQ Nation. “This young man should be speaking with the police and not writing headline-grabbing blogs and teasing details. It just looks like a false claim.”

Neither is Gregory T. Angelo, the former head of Log Cabin Republicans, who said. “Not a fan of Mayor Pete, but this whole thing seems shady as hell.”

Another prominent gay Republican, Brad Polumbo, also chimed in with his doubts.

“All accusations should be taken seriously, but Pete Buttigieg deserves the 100% benefit of the doubt until any misconduct accusation is fully vetted, substantiated, and corroborated,” he tweeted.

Even the team over at the right wing site Twitchy isn’t believing Kelly’s story.

“So far, it seems that only highly suspect and disreputable outlets are running with this,” they wrote in a post published today. “David Wohl, aka Jacob Wohl’s dad, was among those spreading Big League Politics’ story, and Gateway Pundit is pushing it as well.”

Gateway Pundit is published by Jim Hoft, a gay Republican commonly known as “the dumbest man on the internet.” His site has been responsible for spreading multiple fake news stories.

Not a fan of Mayor Pete but this whole thing seems shady as hell.

I certainly hope ⁦@Medium⁩ asked for and received proof/corroboration before running a story that has the potential to ruin a man’s life. https://t.co/3EI0AyAFCW

Does something seem off about this 'very serious accusation' of sexual assault against Pete Buttigieg? https://t.co/57FFUp6Bio

All accusations should be taken seriously, but @PeteButtigieg deserves the 100% benefit of the doubt until any misconduct accusation is fully vetted, substantiated, and corroborated.

This is a sockpuppet account trying to stir up Sanders-Buttigieg animosity pic.twitter.com/YiuLqvj3Zd