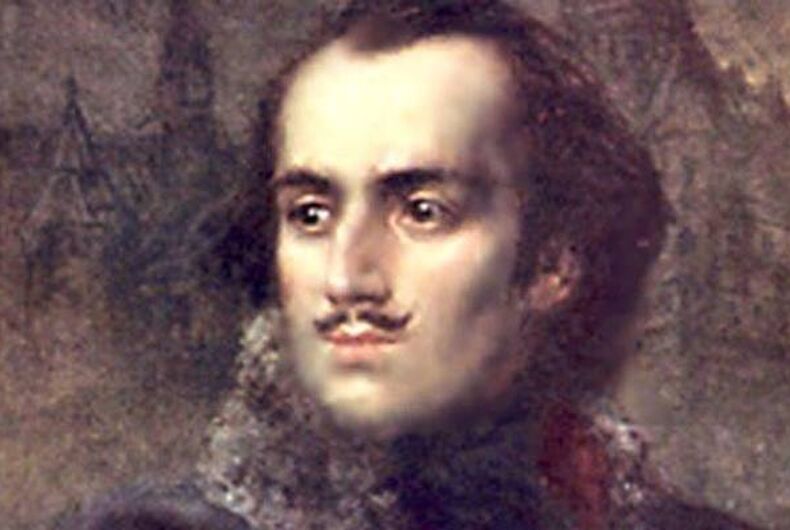 Casimir Pulaski was one of many men who helped win the Revolutionary War. A Polish nobleman, he fought to protect the Polish–Lithuanian Commonwealth against Russian domination, then later traveled to America to become a general in the Continental Army.

He is considered the “father” of the American cavalry and was one of George Washington’s top commanders. Pulaski was gravely wounded at the Battle of Savannah in 1779, and died shortly thereafter, but no one knew exactly where to locate his remains.

Now, researchers, examining a burial site at Pulaski’s monument in Savannah say that they have confirmed via DNA testing that his remains are located under the monument – and they offer tantalizing clues that Pulaski may have been intersex.

According to some accounts, Pulaski’s remains had been buried at a local plantation, only to be moved to the monument sometime after. These remains were exhumed in 1998, but a year’s worth of testing on them proved inclusive.

The remains show a person who was likely between 5′ 1″ and 5′ 4″, and around 34 years old when they died. This, plus injuries to the remains are consistent with Pulaski.

One thing puzzled researchers, however: an examination of the bones revealed details more likely to be found in female remains, including changes to the pelvic bones, a rounded jaw line, and an otherwise delicate face.

“To our great frustration, we were unable to solve the mystery,” said Chuck Powell, a member of the investigation team in 1998, told The Associated Press in 2005.

Powell noted that some on the team said, “we ought to stop here and declare it a female and walk away.”

The report declared, “The pelvic bones were, however, more characteristically female than male,” adding that the bones showed features that are “seen in only about one in 20 male skeletons.”

It is also worth noting that scientists were also unable to match any DNA from the remains to any of Pulaski’s remaining relatives in Poland at the time — but a new DNA test has proven the familial link.

While many have mischaracterized these findings to declare Pulaski a woman, even referring to him with female pronouns, Pulaski was baptized as a male and had both facial hair and signs of male-pattern baldness, leading researches to argue that Pulaski may have instead been intersex.

“That is the only way that these two things make sense together,” said Dr. Estabrook to the New York Times. “He was always a ‘he’ as far as his gender.”

“Intersex” refers to people who are born with sexual characteristics that don’t fit societal or medical norms for male or female bodies. This leads to discrimination and stigma, even from birth.

It’s an umbrella term that covers a wide range of natural variations of the human body. Many of these traits are visible at birth, though many may not become visible until puberty. Some chromosomal variations may not even be visible at any time.

Pulaski is of only eight people to be awarded honorary United States citizenship for his heroics, and is considered one of the fathers of the American cavalry.

The Smithsonian Channel will be airing a special this week on Pulaski and the researcher’s findings.