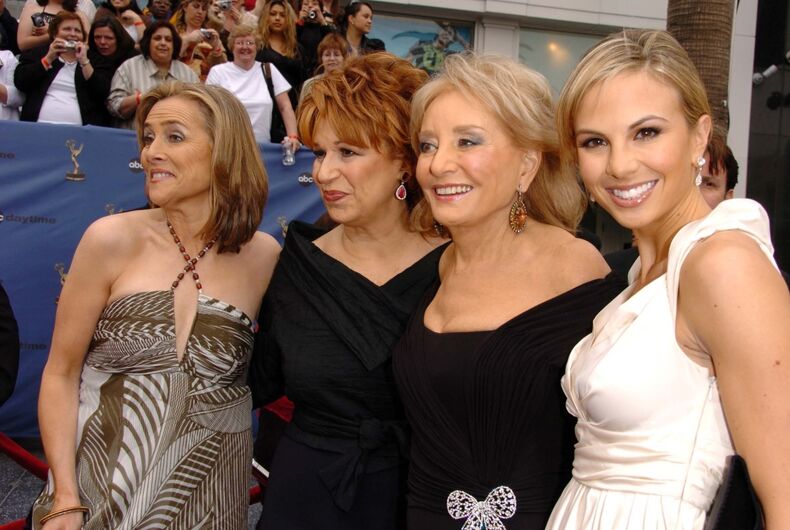 Former “The View” co-host Elisabeth Hasselbeck stormed off stage after an on-air confrontation with Barbara Walters and “quit” the talk show, only to be convinced to be “professional” and return to the set.

In Ladies Who Punch: The Explosive Inside Story of ‘The View’, author Ramin Setoodeh details an explosive day on the set in 2006 after a discussion on the morning-after pill. And now Variety has released the backstage audio of the holier-than-thou Hasselbeck “quitting” and cursing like a sailor.

Hasselbeck became animated during the segment, talking over other hosts and vehemently rejecting any of their attempts to move the discussion forward. At one point, she even posited that taking the pill is “the same thing as birthing a baby and leaving it out in the street.”

“Could you stop now?” Walters interrupted finally. “We have to go on and we have to learn how to discuss these things in some sort of rational way.”

Related: Elisabeth Hasselbeck ‘immediately started praying’ when she heard Rosie had a crush on her

Hasselbeck did not take being chastised on live television well. As the show went to a commercial break, she ripped up her notecards and stormed off stage.

“F–k that! I’m not going to sit there and get reprimanded on the air,” Hasselbeck yelled at co-host Joy Behar after the cameras were off. “What the f–k? I’m not going back out there.”

After a back and forth with Behar, who tries to calm her co-host down, Hasselbeck stormed off to her dressing room and said she was quitting.

Walters, mortified that Hasselbeck is acting unprofessionally, sent longtime executive producer Bill Geddie to bring her co-star back to work.

“She doesn’t want to come back on the air,” a producer tells Walters.

“She has to. Bill, she has to,” Walters says in the audio. “This is why we shouldn’t have done this discussion.”

“Elisabeth has just walked off the show. I tried to stop her. She’s gone,” Behar reports.

The audio also includes Geddie coaxing Hasselbeck back on stage.

“I quit. I’m quitting,” Hasselbeck says. “I don’t need to be reprimanded on-air like that by this woman. Bill, I will take it in the meeting. I will not take that on-air.”

“You are a professional,” Geddie tells her as the show gets ready to return from commercial break. “You’ve got to go back out there.”

Hasselbeck and Geddie took the stairs to return to the set. They didn’t have time to wait for the elevator.

Comic Kathy Griffin, a regular topic of conversation on the show, couldn’t resist weighing in on the scandal in her own video – including a reenactment of Hasselbeck’s hissy fit.

“So the other panelist is my friend, Lisa Loeb, who’s a singer,” she says. “So my guess is Lisa is sitting there the whole time thinking, ‘Why don’t I just have my f–king acoustic guitar and be singing somewhere in a corner. Anywhere but here.”

He threatened to bomb an apartment building for people with HIV. He got a slap on the wrist.