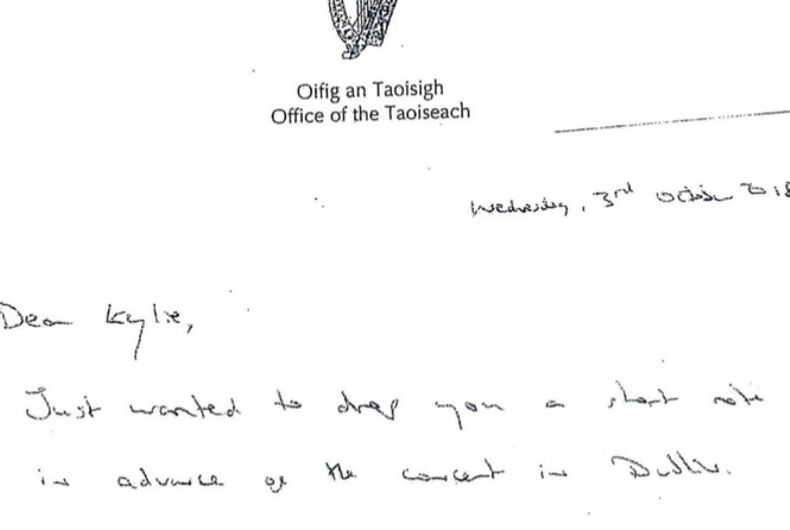 Minogue has a huge LGBTQ following. The Australian singer, who first found fame on a daytime soap opera, has been a hit with gay crowds for much of her career. Varadkar, who is gay, is clearly not resistant to the chanteuse’s charms, either.

Prior to Minogue’s October 3rd appearance in Dublin, Varadkar sent a hand-written letter on official “Office of the Taoiseach” Letterhead. “Taoiseach” is the name for the prime minister and head of government of Ireland. The word literally means “chief” or “leader” in Irish.

“Dear Kylie,” starts the letter. “Just wanted to drop you a short note in advance of the concert in Dublin. I am really looking forward to it. Am a huge fan!

“I understand you are staying in the Merrion hotel which is just across the street from my office in Government Buildings,” Varadkar added. “If you like, I’d love to welcome you to Ireland personally.”

He then signed the note, “Leo V Taoiseach.”

Varadkar is the youngest person to serve as Taoiseach and came out in 2015 during the same-sex marriage referendum in Ireland. He has served as Taoiseach since the middle of 2017.

Varadkar’s office fought the release of the letter, claiming twice that it should be exempt from Freedom of Information legislation. Varadkar himself ended up approving the release, but noted that the letter, “does not relate to matters arising in the course of, or for, the purpose of the Taoiseach’s performance of his functions as the head of Government.”

Some were bothered by the letter, with one critic taking to Twitter to complain.

“This is so embarrassing, once again we are the laughing stock of the world,” read the tweet. “Let him contact Kylie as a private citizen. Not as the Taoisheach.”

Minogue, however, cancelled her October performance, and was unable to take the Taoiseach up on his offer, due to a throat infection. She did come back for a rescheduled appearance that December, however, and did meet Varadkar at that time.

This, too, wasn’t without controversy, as people accused Varadkar of getting a free meal out of the experience. He fought back on his own Twitter account to claim that he was the one who paid — and that he had receipts. It is unclear if those will require another Freedom of Information fight.

The handwritten letter from @LeoVaradkar to @kylieminogue that the Taoiseach's Department twice tried to block from being released. pic.twitter.com/OEJJIzwbVS