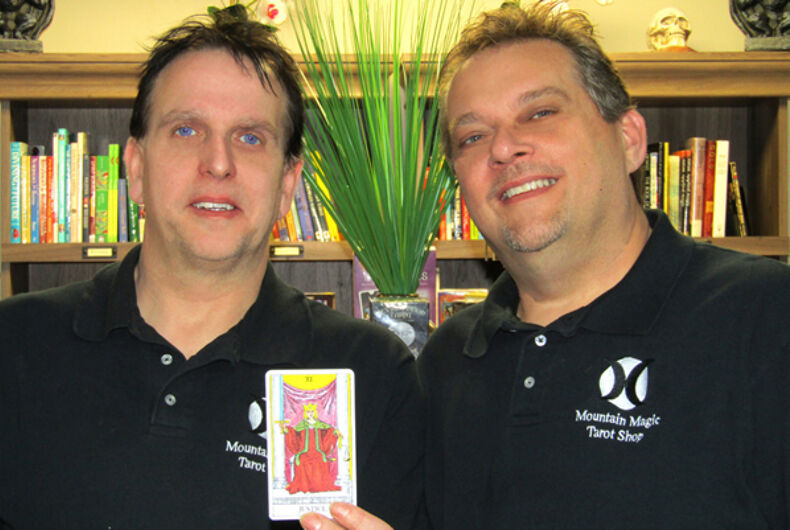 Mark Mullins (left) is suing the town of Richlands, VA for violating his religious freedom after town officials refused to allow him to open a tarot card reading shop.Photo: ACLU of Virginia

Mullins is represented by the American Civil Liberties Union of Virginia who says tarot reading is an important part of Hermeticism, a religious and philosophical tradition that dates back to the 1st century AD and is based off the writings of ancient “pagan prophet” Hermes Trismegistus.

“This is a classic case of a town violating someone’s First Amendment rights of speech and religious liberties,” Vishal Agraharkar, senior ACLU of Virginia staff attorney, told the Washington Blade.

“Tarot is our Bible,” Mullins told the ACLU of Virginia. “It means the world to me to be able to share my practice with others.”

Mullins says he has been reading the cards for over 30 years and that he and his husband practice the tradition daily.

“Mullins wants to be able to share his tarot practice with others seeking spiritual guidance and advice on how to live their lives, just as some members of other major religions seek to share their texts for such guidance,” Agraharkar said in a press release.

The lawsuit alleges the town rejected Mullin’s application for a business license, telling him he must seek an exemption to the town’s zoning laws. City officials held a public hearing on the request and after a “raucous” meeting decided to deny the zoning amendment.

Those opposed to the exemption described tarot reading as “witchcraft” and would “open things up in this area to the demonic realm.” The ACLU says that by denying the application based off resident’s opposition to Mullin’s religion, they have effectively violated his First Amendment right to free speech and religious liberty.

“We’re hoping that this will be a quick resolution. We think that the law is on our side in this case,” Agraharkar said. “What the Supreme Court is clear about is that this is protected speech. A town cannot use its licensing and zoning authority to effectively ban speech like this.”