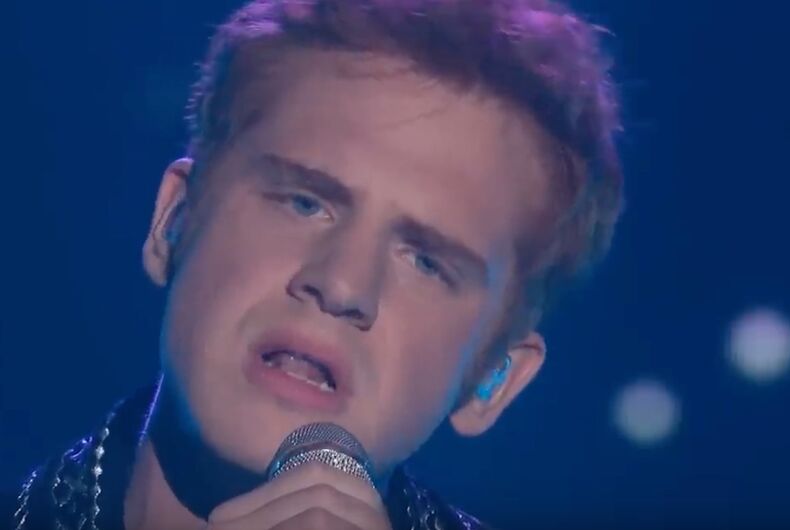 Jeremiah Lloyd Harmon slayed the American Idol judges when he belted out Queen’s “Who Wants To Live Forever” as his parents watched him perform for the first time.

Harmon’s story arc on the hit reality show has featured his rocky relationship with his religious family and their issues accepting him as a gay man. Harmon talked to the judges during his audition about growing up in a very religious family as the son of a pastor. He said that he knew he was gay when he was nine-years-old.

Harmon and his parents say that the show has overblown their relationship struggles, and while they haven’t embraced his sexuality, they haven’t shunned him or rejected him.

“It’s interesting, the narrative that’s been told so far,” he told Out Magazine, “because the things that I’ve said are that it has been a challenge coming out in a conservative Christian environment, and that my parents don’t accept that part about me, which is true. But I’ve never said that my parents have rejected me, or don’t accept me as me, their son.”

But he said it was an “outright lie” that the family rejected him, saying “the doors of this church are open to everybody.”

“I want everybody to know that I will never turn my back on my son, ever.”

Harmon’s first song was one he’d written himself about acceptance. His performances in the next few episodes cemented his place as one of this year’s top contenders.

I am here for you and you for me NO MATTER WHAT. Love you Dad 🖤 #breakfastselfie #familyforever #wegotthis

A white supremacist murdered a black trans woman. He just got life in prison.