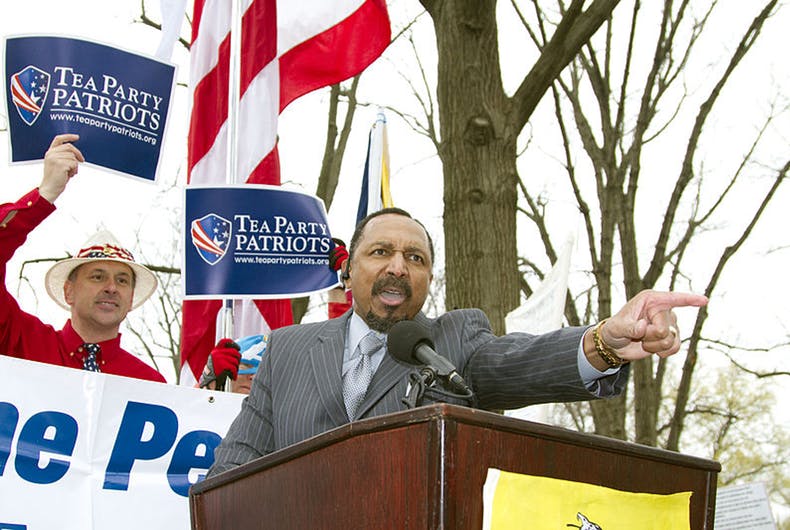 E.W. Jackson at a campaign stop in 2011Photo: Mark Taylor/Flickr

Jackson, who ran for U.S. Senate in 2011 and Virginia Lieutenant Governor in 2013 and failed both times, was speaking on his radio show, The Awakening, about Buttigieg kissing his husband Chasten after his campaign announcement speech.

“One of the things he did to commemorate the announcement, Pete Buttigieg, was to kiss his husband on stage,” Jackson said. “A big old smack in the mouth between two men.”

“A normal man is disgusted by the idea of two men kissing each other on the mouth,” he said, stressing the word “disgusted.”

Related: E.W. Jackson claims people who use ‘they/them’ pronouns are possessed by demons

Jackson, who had already gone off the rails at this point, said that the “gay mafia” wants to “destroy” people who openly express disgust at gay people.

After attacking Barack Obama for doing “more than any other single president to advance the cause of homosexuality and normalize it,” Jackson worked his way back to Buttigieg.

He said that Buttigieg, as president, “would go to the FCC” to force people in the media to refer to transgender people as “they and them, can’t refer to them as he and she” and that he would pass a law banning people from talking about the Bible in public.

“As much as these LGBT activists say that I want a theocracy – which I don’t, I don’t want to punish them or put in jail for what they’re doing, I want to see them converted – but I guarantee you they’d love to see you or me punished or put in jail,” he said.

This is not the first time Jackson has made extreme anti-LGBTQ statements. He has previous said that gay people are “frankly very sick people, psychologically, mentally, and emotionally” and “sexualize [children] at the earliest possible age.”

During his Lieutenant Governor campaign in 2013, Jackson said that marriage equality said that “Adam and Steve” will “soon be Adam and a bull.”

Charlize Theron announced that her 7-year-old is transgender