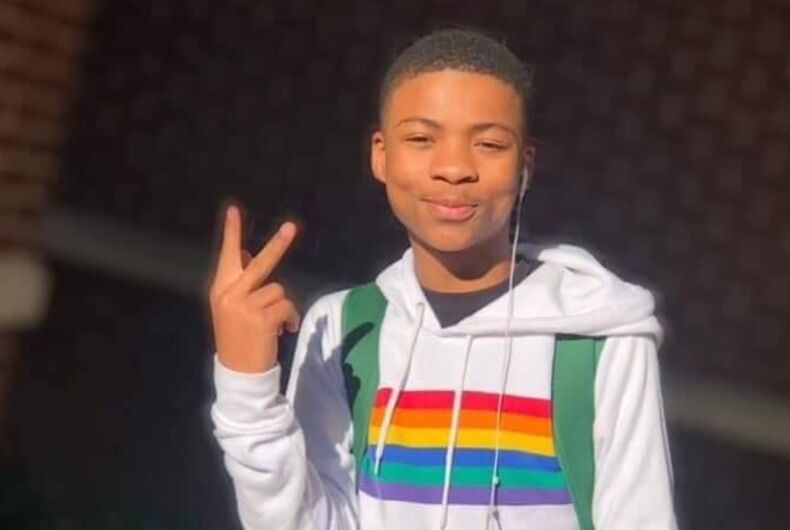 A police officer in Alabama has been put on leave after making homophobic comments about a black gay teen who died by suicide.

Over the weekend, LGBTQ people in Huntsville, Alabama, banded together to raise money for the family of Nigel Shelby. Shelby was 15 when he killed himself, which many people in the community believe was a result of homophobic bullying.

“Nigel took his life because he was bullied for being gay,” Rocket City Pride said in a statement. “There are no words that can be said to make sense of this devastating news.”

Now a local sheriff’s deputy has come under fire for posting an anti-LGBTQ comment on social media.

That’s my kind of LGBTQ movement

I’m seriously offended there is such a thing such as the movement. Society cannot and should not accept this behavior. I have a right to be offended by this fake movement which requires no special attention but by persons with an altered ego and fake agenda.

Someone named Lindsay responded to him on Facebook and he replied: “no sir you are for supporting this accepted behavior in this ugly world we live in. Society is who I blame sir and I won’t apologize.”

A spokesperson for the Madison County Sheriff’s Office said in a statement that Graves had been placed on leave.

“The Sheriff’s Office holds all its employees to high standard, and the public can be assured that a thorough and complete audit will be conducted and appropriate action will be taken,” the statement said. “The involved employee has been placed on administrative leave pending the outcome of the audit.”