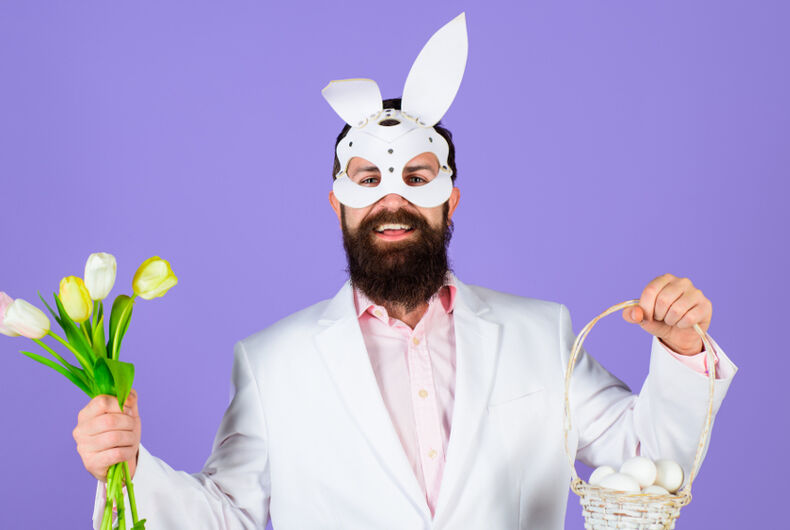 On the face of it, Easter might not seem very queer: It’s a major Christian holiday, after all, and Christians aren’t always too nice to LGBTQ folks. But there are some queer aspects to Easter and LGBTQ people have definitely queered the holiday even more in the modern age. So let’s take a quick look at how the holiday is actually much queerer than you realize.

1. Easter is partially about sex.

Some people claim that Easter is named after Ishtar, the Assyrian and Babylonian goddess of sex and fertility whose symbols were bunnies and eggs — but that isn’t true. Nevertheless, the holiday was adapted from pagan holidays celebrating the start of spring, and those holidays often involved acknowledgement of sex. In fact, to this day “spring awakening” often refers to the arousal of sexual desire in young people, even same-sex desire.

While Easter officially observes the resurrection of Jesus, he himself was arguably gay. He was a notorious bachelor who spent his time hanging with 12 dudes who literally loved and worshipped him. (Judas even kissed him before he died — gay.)

Jesus even went a step further and told his disciples to leave their wives. In Luke 14:26, he tells them, “If you come to me but will not leave your family, you cannot be my follower. You must love me more than your father, mother, wife, children, brothers, and sisters—even more than your own life!”

One queer Christian theologist even recently claimed that Jesus was a “pansexual, polyamorous slut,” but that might be a little too far for some.

3. Passover is about persecuted people moving towards freedom.

The Jewish holiday of Passover (also called Pesach) often overlaps with Easter and celebrates God’s liberation of the Jews from ancient Egyptian slavery. As such, many LGBTQ-identified Jews now recognize Passover as a continuance of their struggle from social oppression and stigma to freedom.

Even before LGBTQ-affirming churches began welcoming us to Easter services, LGBTQ people increasingly “queered” the holiday with celebrations of their own: San Francisco holds an annual Hunky Jesus contest in Dolores Park, often with a drag queen host; New Orleans holds an annual gay Easter parade which often features LGBTQ folks wearing ridiculously large, wildly decorated hats; Obama invited a gay bishop and same-sex couples to the White House Easter Egg Hunt, and — as our sister site Queerty pointed out — the films and fashions of Easter are bright and gay indeed.

5. Conservative Christians have used the holiday to rail against gays.

Some zealots, every day is a holiday for hating on queer people. But in 2016, Brian Brown, president of the rabidly anti-gay National Organization for Marriage, declared all out war on the Easter Bunny, claiming that it “had ‘distorted’ Easter just like the gays have done to marriage.”

A reverential appreciation of Christ’s sacrifice on the cross where he paid the ultimate price for our sins has been replaced with marshmallow candies, jelly beans and the Easter Bunny. It’s the same approach secular elites have taken with marriage — transforming it from an institution designed by God for the benefit of men and women and their children, into something that affirms adult sexual desires whatever they may happen to be.”

But as we’ve just shown you, Easter was already very queer-inclusive, long before Brian Brown declared war on Peter Cottontail. And that shouldn’t upset anyone – after all, the holiday has retained its religious origins even as LGBTQ folks have found reasons to celebrate it with friends and family.

Will Colorado be the first state to elect a gay male U.S. senator?